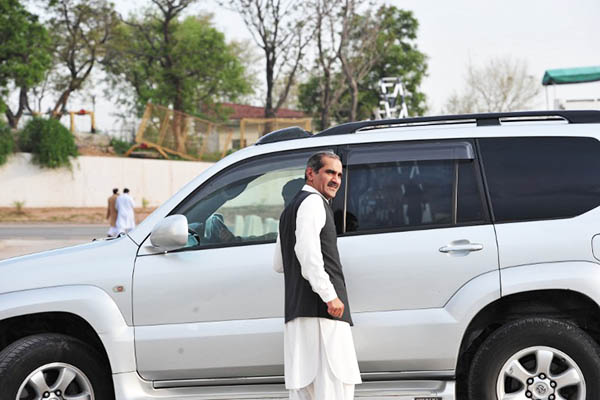 “The election tribunal disqualified Khawaja Saad Rafique today after establishing that rigging had taken place [in the 2013 general elections],” said Hamid Khan, the petitioner for the PTI. “The verdict has found that ballot bags [in some constituencies] were opened with a sharp object and records were tampered with,” he added.

According to Khan, the verdict disqualifies Rafique from holding his Railways portfolio. “Elections will once again take place” in NA-125, he added. The PTI leader claimed the tribunal’s ruling had proven the PTI’s allegations of massive rigging in the 2013 general elections. Rafique disagrees.

Talking to media after the verdict, the ousted Railways minister said the ruling was against the incompetence of returning and presiding officers and did not single him out. “Today’s ruling found no rigging. [Instead] the judge said there were irregularities due to incompetence,” he said, adding that the verdict was “unfair.”

Rafique said he was ready to contest by-polls, but would leave the decision to his party, the ruling Pakistan Muslim League (Nawaz). “My party and legal advisers will decide whether to challenge the verdict in the Supreme Court or proceed to by-elections,” he said. He also alleged that PTI chief Imran Khan’s claims had not been confirmed by the ruling, which only found “irregularities” in eight polling stations out of 265.

The PTI staged a sit-in outside Parliament for three months last year, alleging massive rigging in the 2013 general elections. The matter is currently pending before a judicial commission led by the Chief Justice of Pakistan.