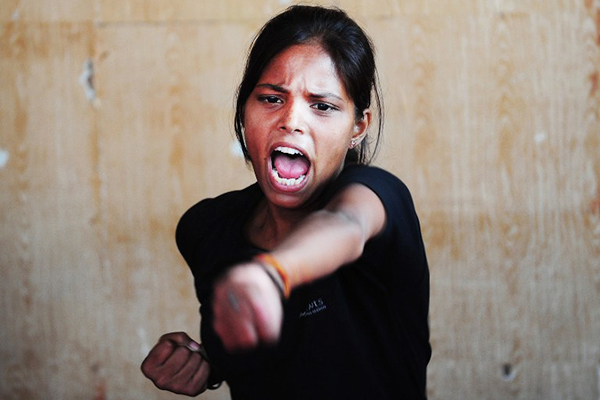 India’s “Red Brigade” is a group of young women with a simple message for the country’s sexual predators: change your ways or face the consequences.

Dressed in bright red shirts and loose black pants, the brigade’s members are fed up with deeply-ingrained patriarchal mindsets. They promote a brand of vigilante justice that is testing the law in their home state of Uttar Pradesh.

Their leader is 25-year-old Usha Vishwakarma, who has become an unlikely heroine to poor young girls growing up in the squalid streets of Madiyon, a suburb of state capital Lucknow. Vishwakarma founded the group two years ago when she saw many of her friends being forced to give up their studies or stop going out for fear of stalking, groping, or assault.

“We were told to stay at home to avoid sex-starved men. If we went to the police, we were asked to ignore the ‘teasing’ and carry on,” said Vishwakarma. “We were fed up with this moral conditioning.”

Initially comprising 15 members, the group has swelled to more than 100 since the fatal gang-rape of a 23-year-old student in New Delhi in December, which sparked a raging debate over the way women are treated in India. “The attack in Delhi made us so angry. Many young women have approached us saying they want to bring about a change so that no one else has to suffer like she did,” said Vishwakarma, her fiery eyes gleaming.

Reported crimes against Indian women stood at 228,650 in 2011, the latest figures available from the National Crime Records Bureau, but these are thought to represent only a fraction of actual offences. Social stigma attached to sexual abuse often prevents victims from filing complaints to the police, who are largely perceived as corrupt and insensitive.

The experience of Afreen Khan, a 16-year-old high-school student and a Red Brigade member, reflects the almost daily harassment that women in the country face and which largely goes unaddressed. A group of boys would regularly make catcalls and vulgar comments about her breasts, until the day one of them stopped her and pulled on her bra strap. “I turned around, snatched the bat he was carrying and bashed him up. The next day I ran into him again but he fled before I could say anything,” said Khan, giggling.

Much of the confidence of the Red Brigade stems from the self-defense classes they have been taking since the Delhi gang-rape. During a lesson at a spartan martial-arts academy tucked in a narrow Lucknow lane, 17-year-old Preeti Verma relayed how she was learning to “kick an attacker in the sensitive places.” She was recently part of an attack on a group of boys in the neighborhood who had been stalking a teenage girl and sending lewd messages to her cellphone. “We just hoisted the boy up in the air and beat him up with our sandals. He ran away promising never to trouble the girl again,” Verma said.

While the Red Brigade has so far not faced any legal comeback over their actions, authorities take a dim view.

“We do not encourage such vigilante groups. You can’t take revenge in this fashion,” said R. K. Vishwakarma, inspector-general for law and order in Uttar Pradesh. “If somebody is harassing you, you have the right to retaliate in self-defense at that time. But you cannot go and even slap a man the next day because that would amount to crime. “As far as the spirit and confidence of the women is concerned, we appreciate that. But their ways may land them in trouble some day.”

Surprisingly, the rough justice the Red Brigade metes out has been winning quiet approval from community elders, such as father-of-four Ram Avatar Singh, who said the group was “showing the way” to other girls. “When we first started out, everyone ridiculed us. Now they look at us with respect and fear,” said Vishwakarma at her cramped two-room house that she shares with her parents, four younger siblings, and a white mongrel.

The house serves as a meeting point for the Red Brigade where the “target” is identified, the tactics discussed and the final action plan sealed. The latest attack to anger the group was the rape of a 13-year-old girl belonging to a low-caste community, who now sits among them with the hope that her voice can be heard.

“I had gone out to fetch water when a boy from the neighborhood pounced on me. He lifted me up and took me to the nearby fields and raped me,” she recounted tearfully. The police did not believe her account and registered the case as harassment, despite new laws that stipulate authorities must investigate rape allegations. It was only after her family and others from her village protested that the police acted and detained the 19-year-old offender. A medical investigation later confirmed the rape.

The Red Brigade has drawn inspiration from the “Pink Gang,” another vigilante group that is credited with sowing the seeds of women’s grassroots activism across Uttar Pradesh, India’s most populous state. Activist Kavita Krishnan of the Delhi-based All India Progressive Women’s Alliance calls such groups a “positive and collective assertion” of women’s rights.

But not everyone is a fan. “If everyone starts taking the law into their hands there will be total anarchy. We should not condone mob-justice mentality,” warned Mriganka Dadwal, founder of SLAP, another women’s rights group.