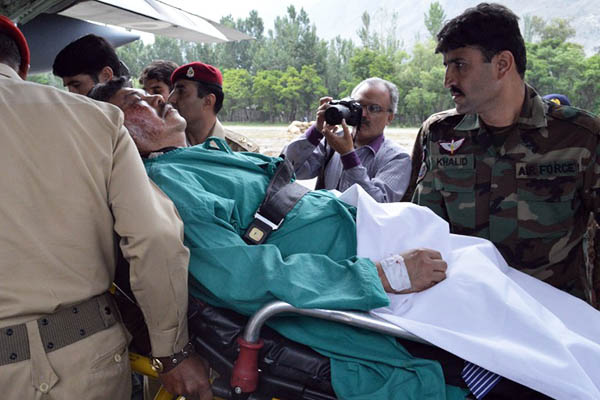 Diplomats who survived the helicopter crash in Naltar remember the terrifying moments of flight’s final descent.

Three ambassadors to Pakistan who survived a helicopter crash that killed seven people have described the terrifying moment the aircraft span out of control before slamming into the ground and catching fire.

Testimonies of diplomats on board from Malaysia, Argentina and the Netherlands released by the Pakistan Air Force (PAF) on Saturday also unequivocally bolstered government and eyewitness statements that the disaster was an accident rather than an act of terrorism.

Malaysia’s envoy—himself injured in the crash—described how the journey had gone to plan until they were due to land at their destination in the northern Gilgit-Baltistan region. “After arriving at Gilgit airport everything went well except for the last few minutes, when the helicopter went into a spiral, round and round and round, and there it hit the ground,” Hasrul Sani Mujtabar said. “I saw the pilot was killed, some others died instantly and I was in middle. Then a few managed to escape but the fire was very strong,” with smoke quickly filling the helicopter, he said.

The helicopter was one of three carrying a delegation of ambassadors to inspect projects on a three-day trip to the region, where they were set to meet with Prime Minister Nawaz Sharif. The Pakistani Taliban had claimed to have struck the aircraft with a ground-to-air missile hoping to assassinate Sharif.

“[Regarding] remarks and rumors that there was a terrorist attack or that there was sabotage, I can say 99.9 percent that they were not true, that this was a sad accident, a really unfortunate accident, by a technical fault on the plane,” Argentinian Ambassador Rodolfo Martin Saravia told the air force.

Leif H. Larsen, the Norwegian envoy, and Domingo D. Lucenario Jr. of the Philippines were killed along with the wives of the Malaysian and Indonesian ambassadors, the helicopter’s two pilots and another crewmember.

Dutch Ambassador Marcel de Vink said he felt “extremely lucky” to be alive after what he had witnessed. He was described as having sustained burns to the leg and face by the foreign ministry. “I remember that we got into a spin and so thinking I suppose I braced a little bit for impact… afterwards I was actually opening my eyes seeing the smoke and explosions, so I was extremely lucky because it went incredibly fast,” he said.

Pakistan Foreign Secretary Aizaz Ahmad Chaudhry told a press conference on Friday there were 19 people on board the helicopter, of whom 12 were rescued, adding that its black box had been retrieved.

The Indonesian ambassador suffered 75 percent burns and is in a critical condition, Chaudry said Friday.

Arrangements are underway to repatriate the bodies of those killed, and would be accompanied by government officials, the prime minister’s office said in a statement Saturday. “The ministers would take the dead bodies on special flights as a gesture of respect and to show the importance Pakistan attaches [to] its relations to these countries,” the statement said.

Air Chief Marshal Sohail Aman, PAF’s Chief of Air Staff, on Saturday corroborated military and foreign ministry statements that the helicopter had lost control moments before landing due to a technical fault, in comments aired by Pakistan’s state television. “The MI-17 helicopter was on a routine flight, and the pilots had excellent professional skills. The base commander was himself observing [the] landing of the helicopter,” he said.

It was Pakistan’s worst air crash since 2012, when a Boeing 737 passenger plane went down in Islamabad, killing 130 people. In 1988, a plane crash killed Pakistan’s then military-ruler General Zia-ul-Haq as well as the U.S. ambassador at the time, Arnold Raphel.

The Russian-built Mi-17, used by air forces across the world, has had a patchy safety record in recent years.