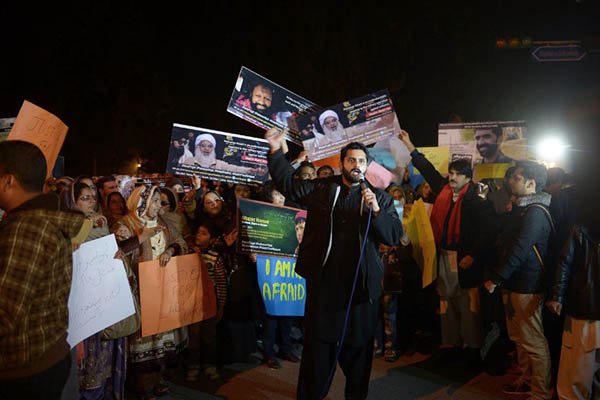 A new movement led by the country’s urban liberals hopes to rid mosques of extremist attitudes.

One month on from a Taliban school massacre in Peshawar that left 150 dead, a new movement is growing among marginalized urban liberals rallying to “Reclaim Pakistan” from violent extremism.

Carrying placards and candles, their stand against religious fanaticism is an unusual sight in a country more used to mass demonstrations by Islamist groups filled with chants against the West or India.

Muhammad Jibran Nasir, a 27-year-old lawyer who has played a key role in organizing the demonstrations, said he and others felt they could no longer stand by following the brutal killings of schoolchildren on Dec. 16. “I never felt so overwhelmed. I felt pathetic as a human being, as a Muslim, as a Pakistani. I felt very, very small,” he said.

While Pakistan’s military has been engaged in heavy offensives in the country’s tribal areas, progressive critics believe the state, including both the Army and political parties, must do more to tackle those Islamist groups that have traditionally received official backing. In an effort to highlight the discrepancy, Nasir, who happened to be visiting Islamabad at the time of the Peshawar assault, led like-minded activists to protest outside the Lal Masjid, whose imam is known for his pro-Taliban views and who has refused to condemn the attack on the school.

Maulana Abdul Aziz led an armed insurrection against the military in 2007, but was acquitted of all charges against him by 2013 in a case which analysts say highlights weaknesses in Pakistan’s judicial system and sympathies for militants among parts of the security establishment. The “Reclaim” movement’s first small victory was the re-opening of an investigation against Aziz, said Nasir. “There’s an arrest warrant out, police say they are doing their own investigation,” he said, adding he was hopeful that more pressure could result in firm action. He has since been threatened not just by Aziz, but also by the Jamaat-ul-Ahrar faction of the Pakistani Taliban over the phone. But, as someone who considers himself an observant Muslim, he felt he could no longer see his faith hijacked.

“I’ve got some views on my religion, I read on it, I research on it to an extent. I can’t seem to reconcile the preaching of my imam and the teachings of the Quran,” he says.

The movement has spread over social media, particularly Facebook, with like-minded groups in the major cities of Lahore and Karachi coordinating their protests and condemning local militant groups that operate in those areas. Analysts believe some militant groups receive backing from the state because they can be used as assets by Pakistan to exert influence in India and Afghanistan—a strategy which progressives are keen to see ended. “We are basically people who are concerned for our own humanity. If we do not take some kind of stance we may very well stay alive but we lose our own humanity by being lazy. It makes us complicit,” said 36-year-old Taimur Khan, an entrepreneur who is part of the Reclaim movement in Islamabad.

Progressives remain a relatively small minority, confined to the educated upper and middle-classes—a fact bemoaned by Nasir. He contrasted the crowds of hundreds at Reclaim rallies with the estimated 1.6 million Parisians who took to the streets to condemn the deadly attack on the offices of satirical magazine Charlie Hebdo.

“Pakistan is desensitized. But in Paris, millions came out. That has made those 12 lives the center of attention for the entire world,” he said. “We have lost 55,000 people to terrorism but we struggle to justify our case to the world that we are doing enough to curb terrorism.”

But he also sees hope for a broader coalition involving the working class. On Jan. 16, exactly one month after the attack, the Reclaim movement held its biggest events to date across Pakistan’s major cities. The few thousand people who turned out included female polio workers who have come under attack by the Taliban, relatives of fallen soldiers, and the father and child of a female Christian bonded laborer who was burnt to death for allegedly committing blasphemy along with her mother. In Islamabad, protesters laid out symbolic coffins carrying the names of each of the children who died in Peshawar.

Sundas Hoorain, a 29-year-old lawyer from Lahore, said the event could prove a turning point. “More and more people are joining in because they agree with us. The narrative now resonates beyond the elites … People are saying ‘When you attack children, that’s it’,” she said.