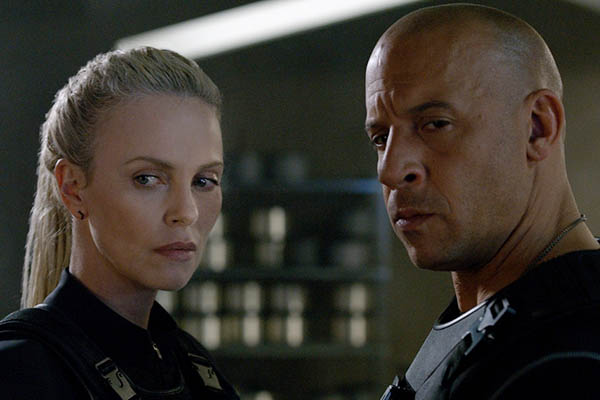 The Fate of the Furious debuted in super-high gear this weekend, taking in $100.2 million on North American screens and roaring to record global revenues of more than a half-billion dollars, industry analysts estimated on Sunday.

Exhibitor Relations said the latest chapter in Universal Studio’s Fast and Furious series accounted for nearly two-thirds of North American revenues over the three-day Easter weekend, leaving previous frontrunner The Boss Baby, a Fox/DreamWorks animation, in its dust with just $15.5 million in sales.

Banking on megastars Vin Diesel and Dwayne “The Rock” Johnson, the latest Furious film opened exceptionally well in the rest of the world also. Led by China, which set a three-day record of $190 million, the film brought in $432.3 million in some 60 countries.

It was the No. 1 film everywhere, website BoxOfficeMojo.com reported.

The $532.5 million global debut, once North American revenues added in, would break the record of $529 million held by Star Wars: The Force Awakens. It would also surpass such other box-office monsters as Jurassic World ($524.9 million) and Harry Potter and the Deathly Hallows Part 2 ($483.2 million).

The film, directed by F. Gary Gray of Straight Outta Compton fame, also features Charlize Theron, Tyrese Gibson and hip-hop star Ludacris. In it, Diesel’s Dom Toretto character is coerced to join forces with a cyber-terrorist played by Theron, who turns him against his team.

For all its strong showing, the manic muscle-car-filled film earned nearly a third less in its first North American weekend than the previous Fast and Furious chapter, which drew $147.2 million. But Universal is not about to apply the brakes: additional Furious chapters are planned for release in 2019 and 2021.

Beauty and the Beast continued to draw viewers to North American theaters this weekend, earning $13.6 million in its fifth week. The Disney blockbuster, starring Emma Watson and Dan Stevens, has taken in $454.7 million domestically while pushing past $1 billion internationally.

The animated Smurfs: The Lost Village from Sony was fourth with $6.5 million. That was half its opening take from a week earlier. Holding fifth spot on North American screens was Going in Style. The Warner Bros. comedy, starring Morgan Freeman, Alan Arkin and Michael Caine as aging bank robbers, had weekend sales of $6.3 million.

Emma Watson is Belle of the Ball in...