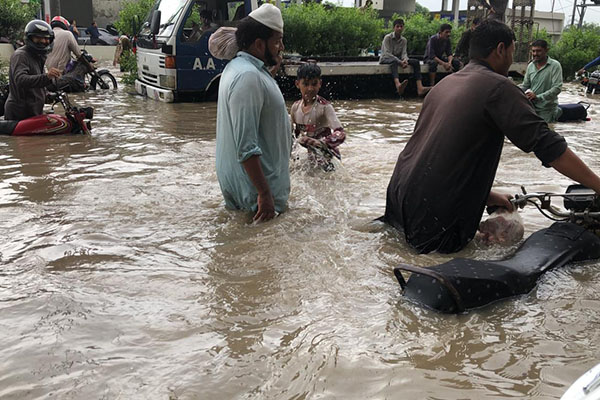 At least 25 people have died in various rain-related incidents, while large parts of the city remain submerged underwater

At least 25 residents of Karachi died in various rain-related incidents over the past two days following record-setting monsoon rains that have swept over Sindh and raised significant questions over the government’s ability to provide emergency relief.

Officials of the Pakistan Meteorological Department have said that the ongoing rainfall has shattered 89-year-old records for the Sindh capital. Talking to Reuters, an official said that around 484mm of rain had been recorded in the city thus far this month, which is the highest level recorded since the city started maintaining data in 1931. By Friday afternoon, this number had exceeded 500mm in various parts of the metropolis.

According to the Met Department, Karachi received 223.5mm of rain in just 12 hours on Thursday, the highest amount of rain ever recorded in the city in one day. The previous 24-hour record was on July 26, 1967, when 211.3mm was recorded.

Due to the inundated roads—which left many people stranded at their offices—Chief Minister Murad Ali Shah on Thursday night announced a public holiday for today (Friday) directing all government, semi-government and private institutions to remain shut in Karachi as part of a “rain emergency.”

According to a police official, at least 25 people have died due to the rains thus far, including due to electrocutions, drowning, road accidents, and wall collapses.

The Pakistan Navy, in a statement, said that it had recovered the bodies of two persons during its relief efforts. It said that it had deployed emergency response teams to aid the civil administration, adding 55 people trapped in flooded areas had been evacuated to safe locations.

The flooding has affected cellphone services, and left large parts of the city with no electricity. In a message on Twitter, Karachi Electric said that power had been suspended in several areas as a precautionary measure. “Power shutdown in effect for public safety as streets, houses and buildings flooded. In this crisis please be prepared for prolonged shutdowns as power restoration is dependent on water receding,” it added.

Prime Minister Imran Khan phoned Chief Minister Shah and offered help for the victims of rains in Karachi, Planning Minister Asad Umar said on Thursday. “The prime minister has talked to the Sindh chief minister and assured him of all-out help from the center and its institutions to the Sindh government. Whatever help is sought will be provided on emergency basis,” he posted on Twitter.

Shah, in a statement, admitted the incessant, heavy downpour had caused a “disastrous situation” in Karachi. He said residents had been stranded due to river embankments overflowing and directed authorities to ensure they were rescued. Schools areas with heavy flooding should be vacated so stranded residents can be housed in them, he added.

Amid mounting criticism of the Sindh government’s response, he also sought to deny the impression that “the city has been left helpless.” He said the government was working nonstop to help those affected by the disaster, adding the accumulated water could not be drained unless there was a break in the rain.

Sindh Governor Imran Ismail also termed the situation “unusual and abnormal,” and said he had briefed the prime minister on the crisis.

The armed forces have set up flood control rooms in Karachi and Malir to assist citizens during the ongoing rain emergency, read a statement issued by the Inter-Services Public Relations. It said that a medical camp has been set up at the district center of Gulberg, Liaquatabad and New Karachi to provide medical care and noted that several sites had been cleared of water, while meals had been provided to 10,000 people.

Chief Meteorological Officer Sardar Sarfraz has predicted more showers today, adding that moderate spells of rain are likely through the afternoon. He has also warned that a second spell of rains is likely to commence from tonight and last through Saturday afternoon.