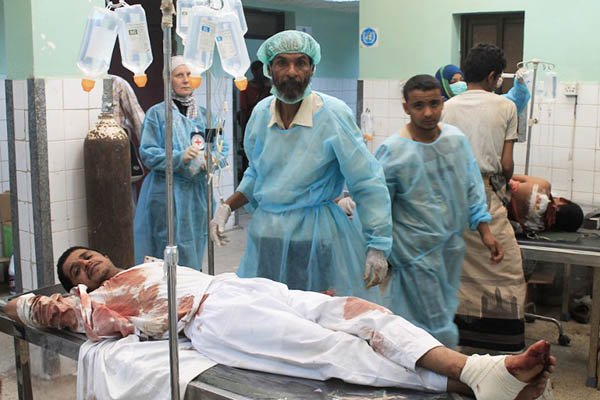 The Red Cross called for a 24-hour ceasefire in Yemen Saturday to give aid workers a chance to address the “dire humanitarian situation” there.

“We urgently need an immediate halt to the fighting to allow families in the worst affected areas, such as Aden, to venture out to get food and water, or to seek medical care,” Robert Mardini, the aid group’s head of operations in the Middle East said in a statement.

Hospitals treating the wounded are running low on medicines and the streets of Aden are strewn with dead bodies, he claimed. “Our relief supplies and surgical personnel must be allowed to enter the country and safely reach the worst-affected places to provide help,” he added. “Otherwise, put starkly, many more people will die. For the wounded, their chances of survival depend on action within hours, not days.”

The International Committee of the Red Cross (ICRC) also said there were fuel and water shortages in many parts of the country, with food stocks running low. It called for all land, air and sea routes to be immediately opened to allow the delivery of 48 tons of medical supplies and surgical kits the organization has ready to treat the 2,000 to 3,000 people who have been hurt in the fighting.

The country’s civil war has increasingly become a regional battle between Iran-backed Houthi rebels, and government forces backed by airstrikes from a Saudi-led coalition of Gulf states. Despite repeated appeals in the past week to allow humanitarian aid into Yemen, ICRC personnel and supplies have been blocked from entering the country.

The Geneva-based organization said if allowed entry to Yemen, it would transport tents, generators and materials to repair damaged water systems, and deploy a team of surgeons on standby in Djibouti. Three volunteer Red Cross workers were killed this week while going to the aid of injured people in Yemen.