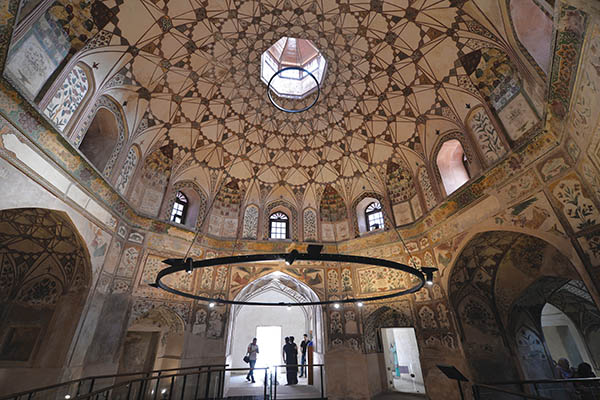 Tourists visit the Shahi Hammam, one of the only surviving 400-year-old Turkish baths in the sub-continent. Aamir Qureshi—AFP

Lahore is a fascinating and rewarding city to explore. The city’s later history can be illuminated through its buildings, the most significant periods being the Mughal and late-Mughal centuries, the Sikh era, and the colonial period, its earlier history having been effaced by natural processes and rebuilding.

Despite all that has written about it, the city’s origins remain murky. It is probably over 2,000 years old, but although historical references under a variety of names seem to exist from an early period, not enough archaeology has been done for real certainty. During the Sultanate period (roughly 1000 – 1500 CE) Lahore’s importance rose and fell, depending on the independence of its ruler from control by Delhi (or occasionally Multan). However, it was always strategically important, resulting in many sieges and, no doubt, considerable destruction. This may, in part, account for the lack of physical remains from this period, but the lack of durable building materials likely also played a part. Lahore is a brick city and bricks can erode quickly if not burnt properly. They can also be easily pillaged and reused. Thus there are virtually no buildings from the pre-Mughal period.

The Mughal emperors had almost unlimited funds and they and their courtiers built prodigiously. Their buildings are scattered throughout the center of Lahore. The Mughal city was large, consisting of the Walled City and extensive suburbs to its south and east, containing a variety of buildings of which some mosques, tombs and gardens have survived into the modern age. Although it was an important city right from the start of the Mughal dynasty, the surviving buildings are mostly from the 17th century, many from Shah Jahan’s reign. Inside the Walled City the most spectacular buildings are the Lahore Fort complex, the Badshahi Mosque, and Wazir Khan’s Mosque, all of which are easy to visit. Besides Delhi Gate, which provides the easiest access to Wazir Khan’s Mosque, visitors can also find the recently restored Shahi Hammam, from the same period. Wazir Khan’s Mosque is stunningly decorated with tile mosaic, as is the north face of the Fort (around and beside the Shah Burj entrance gateway). This kashi kari (tile) work is typical of the region, occurring in many places in Pakistan and further west, but very little further east. 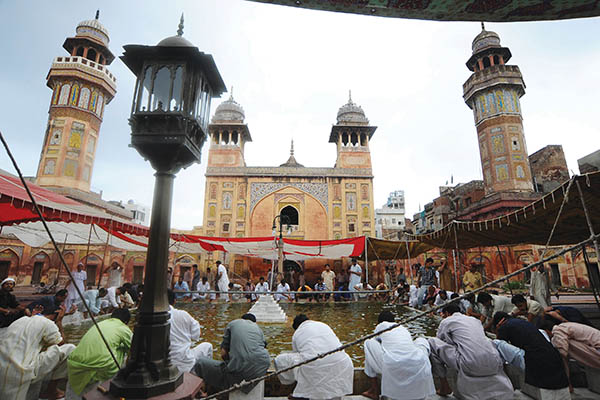 Outside the Walled City many of the most interesting Mughal buildings are less easy to visit. The huge Anarkali’s Tomb is one such, being part of the government Secretariat complex, but I would recommend visiting Wazir Khan’s Baradari, behind the Lahore Museum, and Shah Chiragh Gilani’s mosque and tomb, near the High Court. Across the Ravi River is the Shahdara tomb complex, containing Jahangir’s magnificent tomb as well as the less well preserved tombs of Nur Jahan and her brother.

In the later Mughal period there was considerable turmoil and the state fragmented but, nonetheless, patrons of architecture still existed. A gem from this period is the mid-18th century Sonheri Masjid, a few hundred meters beyond Wazir Khan’s mosque. During this period the then-ruling family lived partly in Begumpura, the area north of the historic Grand Trunk Road. There are numerous remnants from these times, the most curious being the doorless Sarvawala tomb, said to be the meditation room, then burial place, of the sister of local ruler Zakaria Khan. This is in direct alignment with two Shah Jahan-era buildings: the Gulabi Bagh gateway, right beside the GT Road, and Dai Anga’s tomb behind it. All through the late Mughal period festivals and entertainments were held in the beautiful Shalimar Bagh, another of Shah Jahan’s projects, further down the GT Road, which is also well worth a visit.

From the Sikh period one of the finest buildings is Ranjit Singh’s Samadh (memorial), situated in the ornate complex beside the current entrance to the Fort—now difficult to visit because of security concerns, but more visible is his marble baradari in Hazuri Bagh, which separates the Fort from the Mosque. In the Walled City is the spectacular Nau Nehal Singh haveli, built by Ranjit Singh’s grandson, just north of the Mori Gate. It is now a girls’ school, so not necessarily easy to enter, but the exterior is worth a visit: a painted façade on the west side, perhaps over-restored, and a very fine carved brick façade on the east. Of the remains of the Sikh religious buildings, apart from the complex around Ranjit Singh’s Samadh, the best preserved is the Gurdwara Janam Asthan Sri Guru Ram Das, built on the site of the fourth Guru’s birthplace. This is not far from Wazir Khan’s mosque (in the direction of Chuna Mandi Chowk).

From the colonial period two very different types of buildings exist: those built by the British, of which the remaining ones are mostly institutional, and those built by the local population, many of which were and still are residential. Among the first group perhaps the most impressive is the late-nineteenth century Lahore Museum, partly designed by the highly talented Bhai Ram Singh and built under the engineer Sir Ganga Ram. Around the Museum are a number of fine university buildings. Further down the Mall is Aitchison College, with some charming buildings also designed by Bhai Ram Singh, but access is restricted. 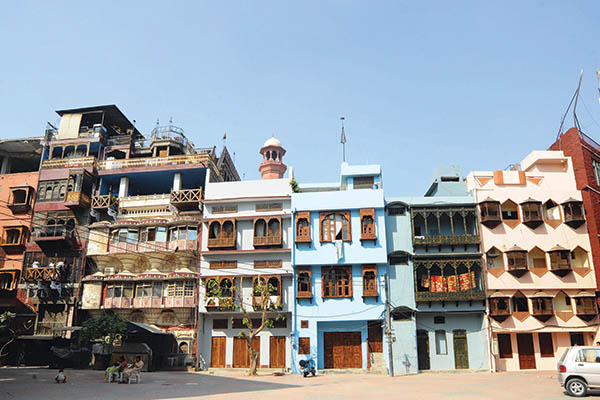 The buildings erected by the local population during the colonial period are the most plentiful among the historic buildings of Lahore. They are found both inside the Walled City and throughout the Civil Lines area—which also coincides pretty well with the early Mughal suburbs—where areas of widely spaced colonial bungalows were interspersed with pre-existing villages as well as areas of tightly packed but handsome houses built on lanes that were laid out in the early 20th century. A particular ‘hot-spot’ is the area just east of the Mayo Hospital, around Chamberlain and Railway Roads.

Inside the Walled City there are countless buildings from this period in varied states of preservation, but easiest to find are the handsome houses built in the area of Heera Mandi (Red Light District) just south of the Badshahi Mosque, in a part of the city that was open ground in the early colonial period. There are several ornately decorated buildings, and the triangle of buildings nearest to the southern gateway to Hazuri Bagh has been flamboyantly renovated, to become a new ‘food street.’ A meal on a rooftop restaurant, with a view of the flood-lit mosque, should prove an able end to any tourist’s visit to Pakistan’s cultural capital.

Peck is a London-born architect who has published several books on heritage sites across South Asia, including Delhi: One Thousand Years of Building (2005) and Lahore: The Architectural Heritage (2018)

My personal discovery was unavoidable. I called him Manto Abajan since my childhood. I was born a year before he passed away. He was my father’s maternal uncle and married to my mother’s elder sister, Safia. My widowed aunt lived with her mother and three daughters in the same Lakshmi Mansion block in Lahore as us. I grew up with Manto’s conspicuously absent presence in our joint family and was intrigued by his short stories, several of which I knew before I had learnt to read. The dramatic ending of his classic  fascinated me as a child and made me want to know more about 1947. I sensed then that my bond with Manto Abajan transcended the family relationship. My granduncle’s literary talents had spotlighted the consequences of Partition on ordinary people. As a doctoral student of history at the University of Cambridge, I chose to work on the causes of India’s Partition and the creation of Pakistan. Though I asked different questions, I was keenly interested in unearthing the historical evidence on what led to the colossal human tragedy captured so poignantly in Manto’s stories.