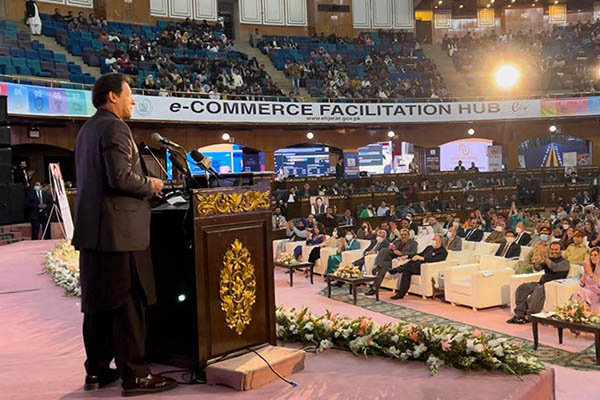 Prime Minister Imran Khan on Monday announced that the government has decided to exempt all registered freelancers from taxes, as he vowed to remove hurdles to ensure Pakistan’s youth can avail the full benefits of the “technological revolution.”

Addressing the E-Commerce Pakistan Convention in Islamabad as chief guest, he claimed that the government expected the country’s I.T. exports to reach $50 billion in a few years. “We have provided small incentives, and in a span of a year or two, our I.T. exports have jumped from $2 billion to $3.75 billion,” he said, and praised the youth for taking advantage of the incentives provided. He said the government would soon introduce even more incentives.

Stressing that youth should not miss out on the global I.T. revolution, he said it could generate much-needed revenue and bridge the country’s trade gap.

The prime minister said that the reason behind him inviting Microsoft co-founder Bill Gates to Pakistan was to encourage the philanthropist to aid the country’s I.T. sector. He claimed there would be “good news” in this regard in the coming days. “The way he helped with polio in Pakistan, I am surprised. What interest could he have in Pakistan?” he asked, adding that Gates had spent a considerable amount of money in Pakistan for polio eradication efforts.

Claiming that Pakistan’s education system had prevented talented individuals from excelling, he said the government was working to fix this by introducing the single national curriculum in an effort to build a nation. “I.T. is related to this because it is our future,” he said, adding that I.T. specifically provided women a platform to excel. “There are several problems. Sometimes they are cultural problems, sometimes the parents worry about the environment their daughter works in. So this provides the most easy opportunity,” he said.

Also addressing the gathering, Finance Minister Shaukat Tarin said the prime minister had emphasized digitizing the economy in line with global trends. He said using technology, people could now open banks accounts; make transactions; buy houses and cars without having to leave their homes. He claimed Pakistan wanted to move side-by-side with the world, noting this required an upgradation of available internet services. He vowed that the government would prioritize quality over revenue while awarding a 5G spectrum license.