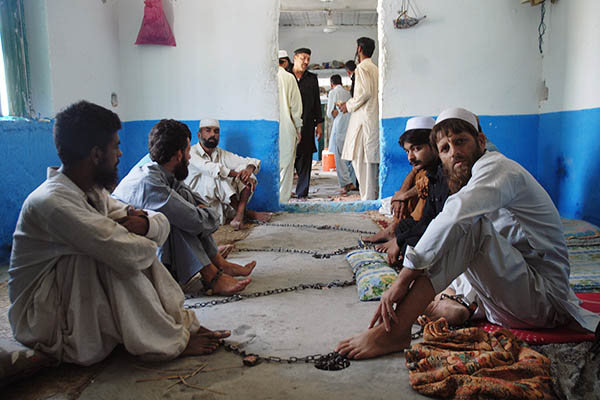 A drug ‘clinic’ in Haripur relied on beatings and imprisonment to cure addiction.

Hashish addict Noor Rehman has spent three years chained to a concrete slab covered by insects. Beaten and malnourished, he lost his eyesight in a “clinic” run by a Pakistani mullah who claimed to cure addicts by keeping them against their will and forcing them to recite the Quran.

“They treated us worse than animals,” the 30-something with a salt and pepper beard muttered among a room full of mullah Maulana Ilyas Qadri’s last remaining patients, all clapped in irons.

When police broke into the clinic last week in Haripur, they found 115 ‘patients’ chained in pairs and shackled to the ground. Most have now been freed and Qadri has been arrested, but around 20, including Noor, are waiting for their families to come and take them home.

The clinic’s methods fall on the more extreme end of the spectrum, but offers some insight into how the nation deals with the taboo subject of drug addiction. Observers say a lack of legal oversight allows such institutions as well as some mental asylums to become places where families can “do away” with inconvenient relatives.

To prevent inmates from escaping and getting back on to drugs, Qadri left them permanently chained, day and night—except for a few precious moments to go to the bathroom, still chained to their partner. If they uttered a word of complaint, they were beaten by the mullah and his four guards.

“They tortured us! By the end of it, patients developed mental issues,” said Noor, who lost his sight eight months ago after two years of confinement. “It was due to psychological pressure and stress,” he said. Unhygienic conditions where an eye-infection would likely go untreated may have also played a part.

Noor’s brother took him to the center after discovering his hashish addiction. But he could never imagine himself being imprisoned, let alone becoming handicapped as a result. Like many other “patients” he blames his family—in this case his brother, who he accuses of leaving him at the center so he could steal his lands.

Shafiullah, an Afghan refugee with a sinewy physique and bright, turquoise eyes, added: “There was no therapy here, just chains. The mullah lets us go out only when he wants our help in construction work. It was us who built these walls.”

Others said they were forced to cook and clean in the absence of staff.

Many became addicted to the widespread and cheap drug, with Pakistan a hub for opium smuggled in from neighboring Afghanistan since the 1980s. Today, Pakistan has more than four million cannabis consumers and more than 860,000 heroin users, a figure which has doubled since 2000 according to a recent U.N. survey.

Many detoxification clinics offer primitive therapies. Some isolate their patients behind bars, but it is unusual for them to be deprived of their freedom.

A complaint by the family of one patient at Qadri’s clinic led to a police raid and his downfall. Locked up at Haripur police station, the incarcerated mullah continued to defend his controversial methods, even as he faces the prospect of jail time for torture and illegal confinement.

“I recite the Quran, then blow on water and give this water for drinking three times a day. Normally the addicts who stop using have the tendency to vomit and shake. But thanks to the Surah Yaseen they don’t have problems,” said the self-proclaimed healer. “And then one week, without any medicine, they are better. Even in the top institutions you will never see this,” he boasted, while calling himself a victim of police corruption for failing to pay them a bribe.

“He chained us and beat us with a stick. This has nothing to do with Islam,” responded ex-patient Shafiullah.

The controversial mullah was previously arrested in 2006 for imprisoning patients in his clinic. But he was released under bail and then acquitted. He then re-opened his center where his shock therapy costs each family Rs 8,000 per month.

During family visits, patients were instructed to say “everything is okay, else they would be beaten” said Mehboob Khab, head of the police station where the Mullah is jailed. But his controversial methods also found approval among many families.

“When he’s chained up, my son cannot escape. These chains are doing him good, and on top of it he has learnt to recite the Quran,” said a man called Sultan, who was outraged by the closure of the center. Niaz, who came to pick up his brother Lutuf, said the treatment was necessary. “My brother needed this severe treatment. Without it he would get back on the drugs.”

Lutuf stared blankly into space for a moment before responding. “My brother doesn’t know the whole story. I know what happened here.”