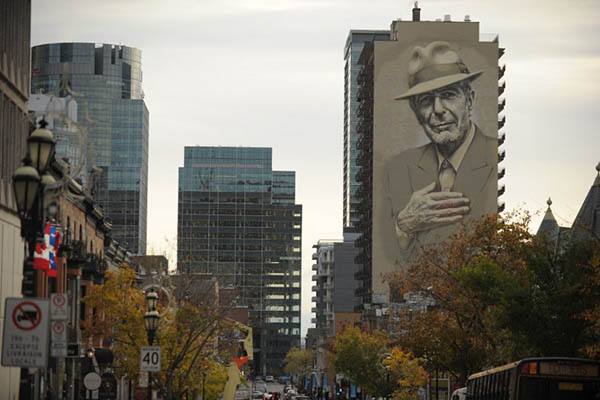 Leonard Cohen’s “Hallelujah” has been covered hundreds of times, so often that the legendary songwriter once pleaded for a moratorium. But the tune has never been done quite like this.

A new exhibition in Cohen’s native Montreal offers startlingly creative interpretations of works by the singer who, despite winning acclaim for his literary profundity, was never especially cutting-edge in his music or presentation.

Artists imagine Cohen’s songs through installations that include a locked bedroom, an organ whose keys recite Cohen’s verses and a live performance in which a dancer slithers on the floor. The exhibition opened on Thursday amid commemorations for the anniversary of Cohen’s death. It runs through April 9 at the Musee d’art Contemporain, the modern art museum known as the MAC.

Among the most powerful works, the museum features a shrine-like darkened cove in which visitors join a communal humming of “Hallelujah.”

Using data from Spotify and YouTube, the installation estimates how many people around the world are listening to “Hallelujah” that moment—470 on a recent morning—and brings together the same number of hums from recordings collected across pitches.

Visitors can pick up microphones and hum as well, with the reverberation filling the structure from the ground up. “It’s both a scientific and a mystical experiment where we are trying to tap into that universal resonance of people listening to the same song at the same time,” said artist Melissa Mongiat, who designed the installation with Mouna Andraos.

“Hallelujah” finds another communal interpretation from artist Zach Richter who designed a sort of one-man choir through virtual reality. The visitor wears a VR headset and in 360 degrees watches a musician, Bobby Halvorson, sing every part of “Hallelujah” in assorted octaves, which come together.

Richter said that virtual reality allowed “Hallelujah” to be arranged as if in a medieval church—yet it also allowed each viewer to have a different experience.

Richter, who also shot a VR video for pop star Pharrell Williams, voiced confidence about the technology’s future in music. “It’s a totally new aesthetic and totally new visual language,” Richter said. “The music video has been around for 40 years in its current form and I think now we are starting to see an evolution on what that can be.”

In a quirkier communal experience, South African artist Candice Breitz picked 18 Montreal men of age 65 or older to belt out Cohen’s synthpop-tinged 1988 album “I’m Your Man.” The men—all highly animated, if with various degrees of finesse—appear on 18 screens facing in a circle, with the visitor free to walk and experience each senior’s style.

In one of the most abstract pieces, French choreographer Clara Furey writhes on the ground topless and emerges forth as in rebirth as she interprets Cohen’s poem “When Even The.”

Israeli director Ari Folman, best known for his Oscar-nominated animated documentary Waltz with Bashir, creates a “depression chamber” in which the person enters a bedroom and, lying supine, is surrounded by fantastical visions set to Cohen’s “Famous Blue Raincoat,” as if living out the song’s darkness. And in a video essay, Michael Rakowitz critically explores Cohen’s warm but not uncomplicated relationship with Israel.

On the musical side, the exhibition features fresh covers of Cohen songs by artists including Moby, The National and Pulp’s Jarvis Cocker.

Museum director John Zeppetelli said the MAC started working on the exhibition—entitled “A Crack in Everything” after a line in Cohen’s optimistic “Anthem”—well before his death.

The idea was to explore through original pieces how “relevant and powerful” Cohen had been over five decades. “The idea was never to do a sort of biographical survey and pull out his suits and fedoras and photographs,” Zeppetelli said.

The exhibition nonetheless ends at its most simple—a projected film of a “bird on a wire,” a silent allusion to Cohen’s song that reflects back on life and freedom.