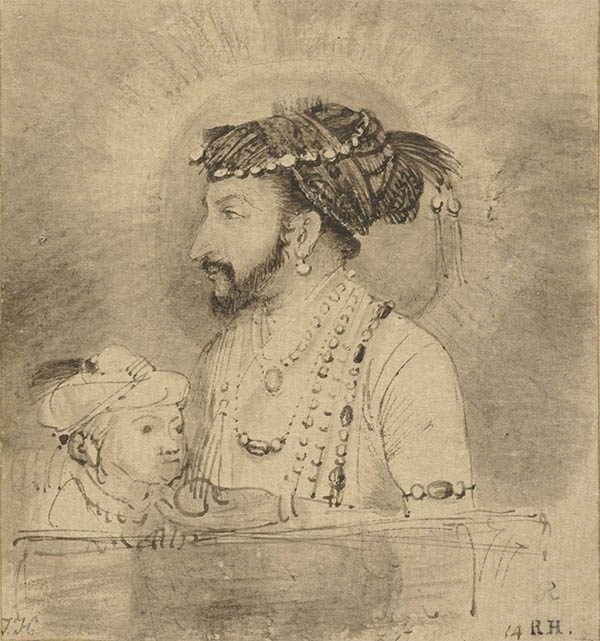 Shah Jahan and his son, attributed to Rembrandt, 1656-61. Rijksmuseum, Amsterdam

A little–known aspect of Dutch artist Rembrandt van Rijn (1606–1669) is his encounter with Mughal painting. During a five-year period from 1656 and 1661, Rembrandt is attributed with the authorship of 23 drawings in a Mughal-inspired style, executed on expensive Asian paper. These small-scale drawings portray royal Mughal figures, including the emperors Jahangir, Shah Jahan and Aurangzeb, several nobles of the Mughal court and spiritual figures. None of these works were wholesale inventions by Rembrandt, but were rather all copied from Mughal sources, which were available to the artist in cosmopolitan 17th century Amsterdam. Over the last two years there have been three exhibitions in North America that have touched upon this fascinating subject. Rembrandt and the Inspiration of India, curated by Stephanie Schraeder and on display at the Getty Museum in Los Angeles, California, until June 24, is especially informative in tracing the links between Rembrandt and Mughal art.

For those who are unable to see the material first hand, all three exhibitions are accompanied by excellent catalogues. Asia in Amsterdam, The Culture of Luxury in the Golden Age (Edited by Karina H. Corrigan, Jan van Campen, and Femke Diercks, with Janet C. Blyberg, Yale University Press, 2017) explores Dutch engagement in Asia, looking at the impact of luxury goods that were imported into the Netherlands in the 17th century. Divine Encounter: Rembrandt’s Abraham and the Angels (Joanna Sheers Seidenstein, The Frick Collection in association with D. Giles Limited, 2017) is centered on a small painting that Rembrandt made in 1646, its scale and composition reminiscent of Mughal paintings. Rembrandt and the Inspiration of India (Edited by Stephanie Schrader, with contributions by Catherine Glynn, Yael Rice, and William W. Robinson, Getty Publications, 2018) pulls together almost all the known Rembrandt drawings of this type, pairing them with demonstrated and proposed Mughal sources. Essays in the book contextualize and discuss the drawings in relationship to larger developments in Rembrandt’s oeuvre and environment, and to Mughal paintings and albums.

The exchange between the Dutch Golden Age and the Mughal Empire is part of the larger story of the encounter between east and west in Europe’s ‘Age of Discovery’, a period from the 15th to the 17th centuries, in which overseas exploration and trade set the stage for both colonialism and globalization. A key player was the VOC, or Dutch East India Trading Company—the largest commercial enterprise in the world at the time—creating material exchanges and a new class of urban consumers. The role that artists played in these encounters was fundamentally important, particularly as products and styles traveled from one end of the world to the other. Artists were both producers and interpreters of visual culture, creating powerful images and perceptions of ‘the other’ that lasted centuries. Most of the Dutch Golden Age artists painted images of exotic people or objects utilizing established formats or idioms such as still life painting or historical dramas. But Rembrandt was different, more genuinely curious about the very language of Mughal portraiture and interested in capturing not just the subject, but the style of Mughal painting. Compared to the colored and larger scale paintings of his later contemporary Willem Schellinks (1627–1678), who also looked at Mughal sources, or to lush Dutch still life paintings filled with imported products such as Chinese porcelain or Sri Lankan pepper, Rembrandt’s drawings seem stark and plain. But they represent an entirely different kind of engagement, a far more cerebral and arguably more dignified one. Mughal figures were not objectified or cast into fantastical settings, rather Rembrandt earnestly copies his Mughal contemporaries such as Balchand or Hashim, much as they copied their own masters as a way of learning. Rembrandt ignored the rich color of the originals and also reshaped some of the figures into more naturalistic poses, but still remained close to the Mughal idiom. 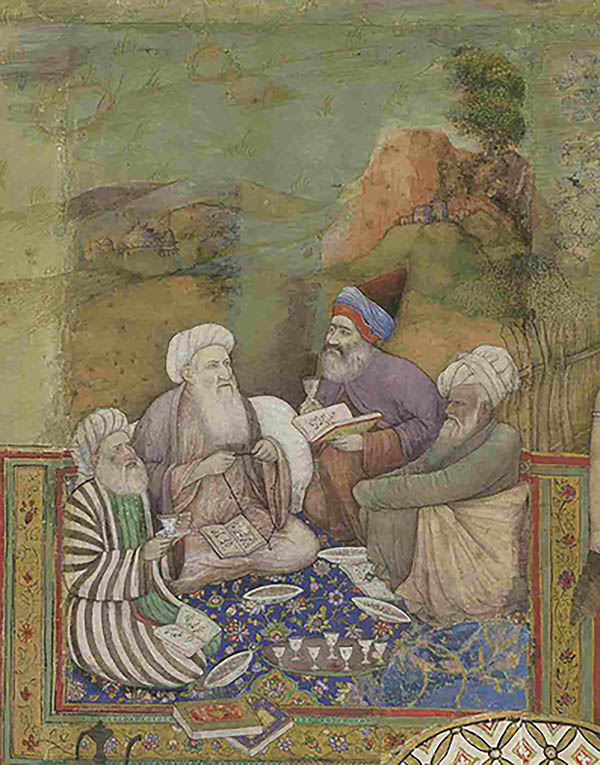 Several theories have emerged to explain the nature of Rembrandt’s approach to Mughal painting and the reason for his creation of these copies. As is well known, Rembrandt was a great collector of objects which he kept in his Amsterdam studio. He used these materials as reference points for his paintings and therefore Mughal paintings may have served a useful purpose for his stylistic research. After his reported bankruptcy in 1656, a list of items that were sold from his household included an album of Mughal paintings. The works were described as ‘curious miniature drawings’ in the inventory: ‘An album filled with curious miniature drawings, together with woodcut and copper engravings of various sorts of costumes’. While some scholars believe his Mughal drawings might be copies of the very paintings in this album that he eventually had to part with, others argue that he was more likely to have made copies of works he didn’t or couldn’t own to record information such as the appearance and costume details of the figures. There is a subtle variation of formats and subjects in his drawings too, suggesting that Rembrandt might also have had varying types of sources at his disposal—from royal Mughal images which portrayed head-to-toe images of princely figures in formal compositions to more commercially produced Deccani export album paintings which placed bust portraits in oval formats. At least three of Rembrandt’s Mughal sources were later incorporated in the 18th century into the elaborate wall decoration in the Millionenzimmer room in the Schloss Schonbrunn Palace, Vienna, along with many other 17th and 18th century Mughal paintings.

Among the paintings in the Millionenzimmer is a Mughal composition dated 1627 and depicting four Sufi saints. Rembrandt’s close copy of it is in the British Museum. In the Mughal image, each figure is identified with small inscriptions on their individual books. Starting with the left, the figure in the striped robe is Shaykh Husain Jam Naqshbandi. Next, holding the rosary we have Shaykh Husain Ajmeri (Chishti). In the conical hat and holding a cup is Dervish Muhammad Mazanderani. And finally seated on the right with his knees drawn up in characteristic pose is Sheikh Mian Mir Qadiri. While the four figures have been discussed as symbols of four important sufi tarikas or orders of South Asia, of them Shaykh Husain Ajmeri appears to be the most important, signified by the cushion he rests on and the arrangement and slightly humbled poses of the figures around him. 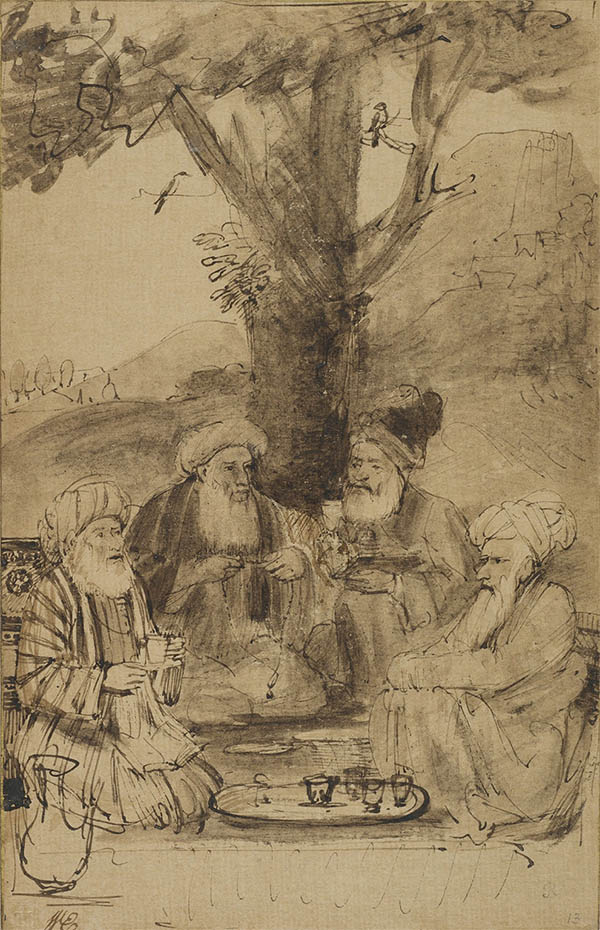 Four Men under a Tree, attributed to Rembrandt, 1656-61. British Museum

Rembrandt’s copy of this painting reminds us that there was once a tree in the background around which the figures are seated. He also sensitively renders the internal hierarchy of the figures and records the details of the round flat tray, vessels and ewer. Of course, the Persian inscriptions that are found on the original are not included in Rembrandt’s work, although professors in nearby Leiden were among the first European scholars to have studied the language. One wonders if he had any knowledge of who these spiritual leaders were or whether he was just copying their depictions as part of an artistic exercise.

Mughal kings and nobles are instantly recognizable in Rembrandt’s copies. Their images were being disseminated across Europe at the time, perhaps in response to the reception of images of European royalty at the Mughal court. Through the movement of these images the impression of the ‘Grand Mughal’ became firmly established in the European imagination for centuries to come. In that sense, Rembrandt’s engagement with Mughal painting played its part in laying the ground for all that was to follow, drawing Europeans to India in diplomacy, trade, adventure and ambition

Haidar is Curator, Department of Islamic Art at The Metropolitan Museum of Art, New York