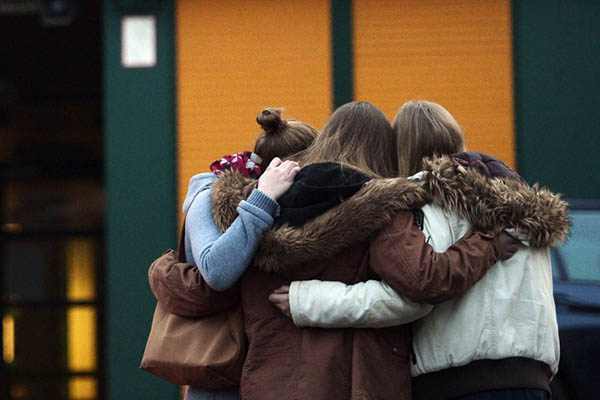 Authorities have said none of the 150 people onboard survived the crash in the French Alps.

Tearful relatives of passengers of the German airliner that crashed in the French Alps Tuesday gathered grieving at Barcelona and Duesseldorf airports to learn that none of the 150 people on board survived.

Several dozen relatives, some wailing and crying, arrived at Barcelona’s El Prat airport after news that the flight which took off there in the morning for Duesseldorf had crashed. They were taken to a room set up for them by police officers, who kept journalists at bay. One elderly lady let out a wail of grief as a young woman escorted her.

An elegantly dressed man in his 60s tried to hide his tears behind sunglasses. Another man walked with his arm round a teenage boy with a stricken expression. Among those grieving were three men who said their friend and colleague was on the plane to Duesseldorf for a meeting on company labor relations.

“He was about to retire,” said one of three, who would not give his name. “The other day he told me that as soon as the negotiations were over he was going to leave.”

Police at the remote crash site in southeastern France said all 150 people on board, including two babies, were killed when the Airbus 320 operated by Lufthansa’s budget carrier Germanwings went down. Spanish officers were taking genetic samples from relatives in order to help identify the bodies of those killed, a police spokesman said.

Psychologists and social workers were attending to the families at Barcelona airport, Red Cross spokeswoman Irene Peiro said. “When they are told the news they have grief and trauma and we try to minimize as much as possible these traumatic, anxious and uncertain moments,” she said.

At Duesseldorf airport, a giant screen greeted passengers with the message: “A Germanwings plane to Duesseldorf has crashed!” Relatives of the passengers there were ushered by airline staff out of the way of waiting reporters.

In the town of Llinars de Valles north of Barcelona, local mayor Marti Pujol said pupils were in shock at a local high school where 16 of the passengers on the plane had just attended an exchange program. “We have the Red Cross and psychologists there. The teachers were in the school and are looking after the children. This affects the whole school,” said Pujol.

In the German school party “there were 16 children and two teachers who had spent a week here, poor things. The children were aged about 15,” he told AFP.

Spain’s King Felipe VI and his wife Letizia happened to be in France on a state visit, which they immediately cut short. Spain’s government decreed three days of national mourning and numerous official events were postponed. The lower house of parliament held a minute’s silence and cancelled sessions scheduled for Tuesday and Wednesday.

Spain’s Deputy Prime Minister Soraya Saenz de Santamaria told public television TVE there were 45 people with Spanish surnames on board the plane but it was not immediately clear how many were Spanish citizens. Prime Minister Mariano Rajoy said he had set up a crisis cell to deal with the disaster, calling it “tragic and sad news.” He said he would visit the scene on Wednesday.

French Prime Minister Manuel Valls said the authorities “can’t rule out any theory” on the cause of the disaster. Lufthansa is working on the assumption that it was an accident, the airline’s vice president for sales and services in Europe, Heike Birlenbach, told reporters in Barcelona.