Home Latest News Religious Anarchy Will Not be Tolerated in Pakistan: Tahir Ashrafi

Religious Anarchy Will Not be Tolerated in Pakistan: Tahir Ashrafi 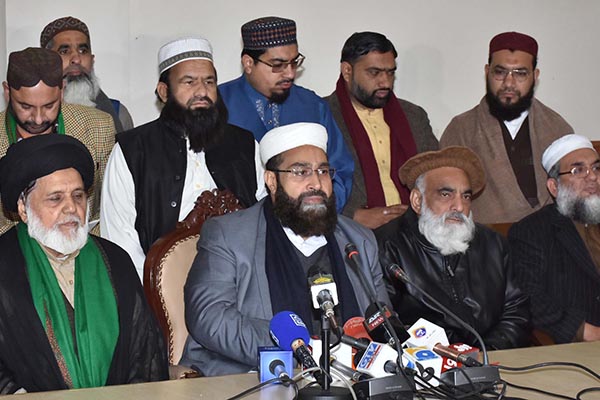 No one will be allowed to provoke religious anarchy in Pakistan, Special Representative to the P.M. on Religious Harmony Tahir Ashrafi said on Sunday.

Addressing a press conference in Lahore, he said that hate speech and divisive content would not be tolerated from any group, adding stern action would be taken against anyone found violating the Ulema Mashaykh code of conduct. Interfaith harmony councils would reinforce religious dialogue nationwide, he said.

Ashrafi said that the incumbent government’s plans to register all madrassas with the Ministry of Education was a “great achievement,” and assured ulema that their reservations would be fully addressed in the Evacuee Trust Properties Amendment Bill. He also said that Prime Minister Imran Khan and President Arif Alvi would soon meet the Ulema-Mashaykh on the prevailing situation and other key issues facing ulema.

The special aide claimed the incumbent government was taking concrete steps to protect the sanctity of the finality of Islam’s Prophet, adding efforts were underway to introduce global legislation against blasphemy, including the publication of blasphemous caricatures, as had occurred in France last year.

French President Emmanuel Macron’s decision to describe Islam as a religion “in crisis” last year provoked global outrage, with protesters in Pakistan demanding Islamabad cut all ties with the European nation. Apart from a diplomatic censure, Islamabad has not advances any other moves to cut ties with Paris over Macron’s statement.

In his media interaction, Ashrafi said the government was working to strengthen Pakistan’s ties with all Muslim countries, noting that cooperation was being enhanced in areas of trade, economy, tourism and religious affairs. To a question, he claimed Saudi Arabia had never intervened in the internal affairs of Pakistan, and had always enjoyed an exemplary relationship with not only the state, but also the people of Pakistan.

To another question, Ashrafi said Palestinians had termed Prime Minister Imran Khan’s principled stance to not recognize Israel until they were guaranteed a separate state as the views of the entire Muslim Ummah.

The incumbent government has been repeatedly questioned on whether it is planning to formally recognize Israel in a bid to normalize ties with the Middle East. However, both the prime minister and foreign policy experts have cautioned that this would weaken Pakistan’s position on the Kashmir dispute. Khan has stressed that his views are in line with those of Quaid-e-Azam Mohammad Ali Jinnah, who had said that Israel cannot be accepted as a state until Palestinians are given their just rights.