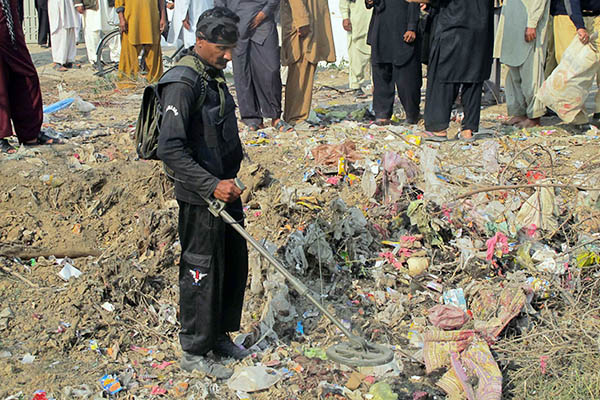 A roadside bomb killed a local religious leader and two other people in Dera Ismail Khan on Monday, officials said, in the latest attack since the Army began an operation to clear militants from their stronghold.

Meanwhile, two soldiers and seven alleged Uzbek militants were killed following a gunfight as part of the operation in North Waziristan.

Faqir Jamshed, a victim of the bomb attack, was in his mid-fifties and considered a “saint” by his followers and belonged to the Sufi order of Islam, which is reviled by the Taliban and other militants. He contested last year’s general elections as an independent candidate from Dera Ismail Khan, which lies close to North Waziristan where the military has been fighting an offensive against the Taliban since mid-June.

Police said an improvised explosive device planted on the road exploded as Jamshed’s car passed near the village of Maddi, just outside Dera Ismail Khan. “Faqir Jamshed, his driver and guard were killed in the blast,” said district police chief Sadiq Baloch. Another police official, Tikka Khan, confirmed the incident and the casualties.

Baloch said that Jamshed might have been targeted by the Taliban over his status as a Sufi saint.

Pakistan began its military operation in the aftermath of a brazen attack on Karachi’s international airport, which killed dozens and left a nascent peace process in tatters.

Separately, the two soldiers who died Monday were engaged in a “snap operation” against Uzbek fighters in the market area of Datta Khel in North Waziristan, according to the military.

Thousands of foreign militants were believed to be hiding out in the tribal district before the operation, having taken shelter there after the U.S.-led invasion of Afghanistan in 2001. The Pakistani Taliban and the Islamic Movement of Uzbekistan claimed joint responsibility for the Karachi airport attack.

More than 500 militants and 29 soldiers have been killed in the assault so far, according to the military, though their death toll for insurgents cannot be independently confirmed.