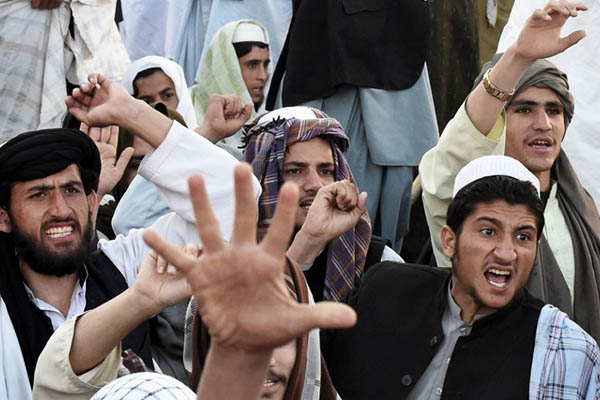 Pakistan on Friday were set for nationwide protests against the printing of cartoons of Islam’s Prophet in a French magazine as a faction of the Taliban denounced the journalists involved as “filthy blasphemers.”

The rallies come a day after Parliament condemned the reprinting of the cartoons, regarded by many Muslims as offensive, in Charlie Hebdo, whose offices were targeted by attackers last week, leaving 12 people dead.

Tens of thousands of religious party activists are expected to turn out nationwide, including followers of Jamaat-ud-Dawah, the charitable wing of the banned Lashkar-e-Taiba militant group, which masterminded attacks on Mumbai in 2008.

The group has come under the spotlight following Pakistan’s pledge to crack down on all militant groups, including those considered friendly to its interests, in the aftermath of a school massacre last month that left 150 people dead.

The Jamaat-ul-Ahrar faction of the Pakistani Taliban meanwhile issued a statement lauding the two brothers who carried out the Charlie Hebdo assault, saying “they freed the earth from the existence of filthy blasphemers.”

“O enemies of Islam beware! Every youth of this Ummah is willing to sacrifice himself on the honor of Prophet,” said the statement, which was sent via email by spokesman Ehsanullan Ehsan.

In addition to rallies by religious parties, lawyers in Punjab and Khyber-Pakhtunkhwa provinces have vowed to boycott court proceedings to display their displeasure over the sketches.

The magazine this week published a “survivors” issue featuring an image of Islam’s Prophet weeping, which sold out Wednesday before more copies of an eventual print run of five million hit newsstands in France.