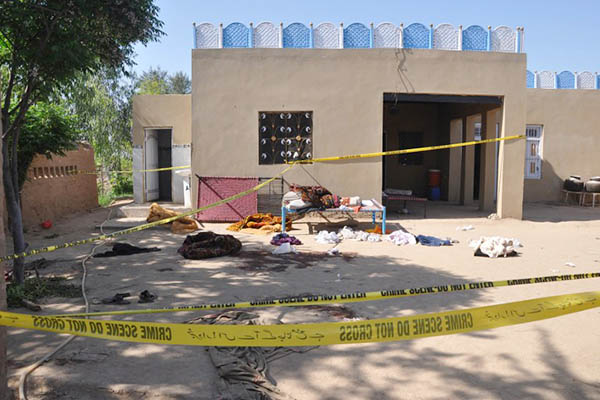 Police say victims, four of them women, were given intoxicants before being slaughtered.

The custodian of a religious shrine and two of his accomplices have been arrested for torturing and murdering 20 worshippers with knives and clubs early on Sunday, police said.

Four women were among those killed in the attacks at the Sufi Shrine to Mohammad Ali in Punjab province. Victims were apparently given intoxicants before being slaughtered and some of the bodies were nude. The motive was unclear but some officials said the chief suspect had mental health problems and had used violence on followers before.

“The 50-year-old shrine custodian, Abdul Waheed, has confessed that he killed these people because he feared that they had come to kill him,” said regional police chief Zulfiqar Hameed.

Another local government official, speaking on condition of anonymity, said Waheed had told police that the saint buried at the shrine had been poisoned and he feared that his victims might kill him also. “The suspect appears to be paranoid and psychotic, or it could be related to rivalry for the control of shrine,” Hameed said, adding that the investigation into the killings near Sargodha was continuing.

Local police station chief Shamshir Joya said the victims, whose clothes were torn and bloodstained, appeared to have been given intoxicants. “We suspect that the victims had been given some intoxicants before they were murdered, but we will wait for a forensics report to confirm this suspicion,” he added. “The victims were brutally tortured to death and apparently the clothes of some victims were torn off during it,” he said. Six of the dead were from the same family.

Joya said the shrine was built some two and a half years ago. Waheed—a one-time employee of the national election commission—took it over upon completion. Local rescue service official Mazhar Shah said Waheed used to meet devotees once or twice a month and used violence to “heal” them.

“Local people say that Waheed used to beat the visitors who came to him for treatment of various physical or spiritual ailments,” Shah told reporters in televised comments. “Sometimes he would remove the clothes of his visitors and burn them.” Television footage showed scattered shoes, clothes, sheets and cots in the yard of the white-painted domed shrine as police vehicles and police commandos surrounded the premises, sited amid green farmland.

Visiting shrines and offering alms for the poor—and cash to the custodians—remains a very popular custom in Pakistan. Many believe this will help get their prayers answered.

Punjab Minister for Religious Affairs Zaeem Qadri said intelligence agencies along with police and the local government were investigating all aspects of the case. He said his department managed some 552 shrines in the province, but this one was not registered with it.

“Investigators will also look into how this shrine was allowed to be set up on private land,” he said.

Pakistan for centuries was a land of Sufism, a mystical branch of Islam whose wandering holy men helped spread the religion throughout the Indian subcontinent in the 13th century. Sufis believe in saints, which they say can intercede for them directly with God. They have no hierarchy or organization, instead seeking spiritual communion through music and dance at the shrines of the saints.

Several million Muslims in Pakistan are still believed to follow Sufism, although it has overtaken in recent decades by more mainstream versions of the faith. Hardliners such as the Taliban or the Islamic State group have carried out major attacks on Sufi shrines because they consider them heretical.

In February, 88 people were killed and hundreds wounded in Sindh province when a suicide bomber blew himself up among devotees at a Sufi shrine.