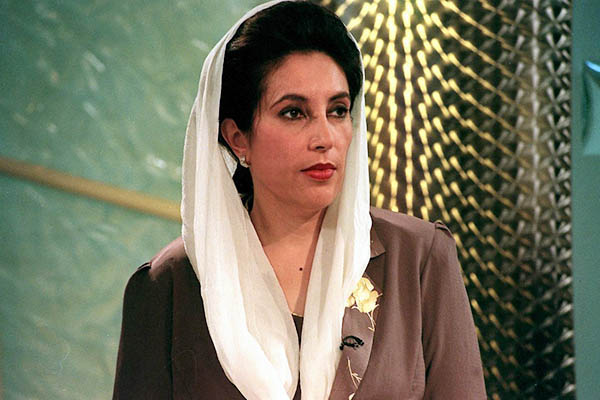 In The Fragrance of Tears: My Friendship with Benazir Bhutto (2021), British journalist Victoria Schofield has written a very personal, and insightful, book on the former prime minister. “It is above all the story of a friendship between two women of different cultures, which began in the sociable environment of Oxford University but which, when transported into the real world, was marked by tragedy,” she says of the text.

The latest biography follows an earlier one penned by another well-known journalist, Owen Bennett-Jones. The Bhutto Dynasty (2020) lays down facts that focus equally on Benazir as well as some little known background to events of her life that highlighted relationships that were important to her.

Benazir became the president of the Oxford Union because of her intelligence and gift of expression, rare among Pakistani politicians. Those were the days when Pakistan’s Tariq Ali and India’s Karan Thapar dominated the scene. Thapar served as the resident of the Cambridge Union at the time, later becoming a respected journalist and commentator. Interested commentators didn’t miss the fact of both Benazir and Thapar serving as presidents of their respective student unions at the same time; a fact borne out by them remaining friends for life.

In 1983, back in Pakistan, she displayed her talent when defending Sindhi Left leader Jam Saqi in the court of law: “In answer to a question relating to the charge against the defendants that they had worked against the ideology of Pakistan, she replied that the basic ideas behind the creation of Pakistan were contained in the first five articles of the 1973 Constitution. Anyone opposed to these articles would be guilty of working against Pakistan’s ideology. But, she continued, although one article stated that the state religion was Islam, this did not mean that everyone living in Pakistan would be a Muslim. She went on to argue that there was no scope in Islam for martial law, that Islam was submission to God, whereas martial law was submission to a military commander.”

Bennett-Jones confirms the issue of the nature of the state. Discussing Zulfikar Ali Bhutto’s 1973 Constitution, he writes: “While Pakistan was named as an Islamic Republic and a clause in the preamble recognized Allah’s sovereignty over the universe, the document made clear that, in practice, the people of Pakistan would be sovereign. When Ayub came up with another constitution in 1962 to cement his military rule, he tried to avoid describing the country as an Islamic Republic but had to back down on the issue.”

The book also delves into Benazir’s decision to get married. She explained: “I got married because I wanted a house of my own. Single women in Pakistan with good reputations don’t live in homes of their own; so, in a way, you could say I got married because the realities of the Eastern culture descended on me and I realized that if didn’t marry I would not be able to pursue my political life.” She added that in case she didn’t marry she would have to ask [brother] Murtaza for permission to invite her guests to the family house owned by him, not her.

Her marriage to Asif Ali Zardari was a union of equals. The Zardaris were of Baloch origin, a signpost of nobility among Sindhi aristocracy, and Zardari’s stepmother was Cambridge-educated Zarine Ara (Timmy) Bukhari, whose father had been the first director-general of Radio Pakistan. By her own admission Benazir did not love Asif at the time of their marriage: “My mother tells me that love will come.” Bennett-Jones reveals that her brother Murtaza didn’t like the idea as he thought poorly of Asif. What is left out is Nusrat Bhutto’s secret “sectarian” choice.

Benazir’s father was overthrown and hanged in 1979. Then “chosen” prime minister Nawaz Sharif was soon overthrown too. Benazir revealed that she was in danger during the election campaign that began with Nawaz’s ouster. “My earlier confrontations with the military hardliners in the security apparatus office came back to life. The ISI was no longer satisfied with trying to keep me out of power by funding the opposition. This time they wanted me permanently out of the picture, removed as an obstacle to their dream of caliphate once and for all. Thus in the fall of 1993 my assassination was ordered, and the chosen assassin was a Pakistani with ties to the ISI during the Afghan jihad.”

(The intended assassin, Ramzi Yousef, gained notoriety for having taken part in the first attack on the World Trade Center in the U.S. in February 1993, as well as the bombing of the Philippines Airlines flight in December 1994. Yousef was extradited to the United States in 1995.)

After Zulfikar Ali Bhutto’s death, Benazir’s brother Murtaza floated a rather radical party, suiting his extreme temperament, which Benazir didn’t like as it cut into the constituencies held by the PPP. “To sour relations still further, Murtaza openly criticized the PPP, alleging that it had been taken over by opportunists and big businessmen instead of following Zulfikar Ali Bhutto’s socialist manifesto. Although she didn’t realize it at the time, Benazir was on the threshold of one of the most difficult periods of her life: Prime Minister of Pakistan 1993-1996.”

On Sept. 20, 1996, Murtaza left his house to attend a political rally. On his way back, just after dusk, his cavalcade was stopped by the station house officer in charge of the local Clifton police station in Karachi. According to the superintendent, his orders were not to touch Murtaza but to disarm his bodyguards on the understanding that they were carrying illegal weapons. A tense standoff followed, during which Shahid Hayat Khan, assistant superintendent, was called in to assist the ASP in charge of the Clifton sub-division. As soon as he arrived he went to talk to Murtaza. Suddenly shots were fired, causing fusillade from both sides, killing a number of Murtaza’s supporters and a taxi driver, and injuring others. In the first round of firing, Murtaza was hit several times. Thus came to an end a developing feud inside the Bhutto family.

“The second child at Oxford was Benazir’s brother, Murtaza. Bhutto’s two oldest children had very different characters. While Benazir was always the responsible one, bossing around her siblings to keep everything in good order, Murtaza thought of himself as something of a rebel. At one point, in the lawn of 70 Clifton he lived in a tent, reading Marx and other leftist writers—until, that is, his father ordered him back into the house. As he grew into his late teens—he was 17 when his father became president—he took to the town, partying at night,” writes Bennett-Jones of the Bhutto children.

“To his father’s irritation, his work at the Karachi Grammar School was not a high priority, and, despairing of his son’s progress, Zulfikar decided to send him to join his sister at Harvard. Murtaza was one year below Benazir in the U.S. and also at Oxford, inevitably leading to feelings that he was to some extent trailing in her wake. Meanwhile, the youngest child, Shahnawaz, was left at home. By all accounts, he was far from happy as a teenager, and after a spell at the American School in Islamabad he was packed off to a school in Switzerland known for its strict discipline. Even the ever-loyal PPP spokesman Bashir Riaz hinted that this was unlikely to benefit an emotionally vulnerable child.”

Instead of a love letter

According to Bennett-Jones, Benazir had sent a list of questions to Asif Ali Zardari before marrying him: “There were three main points: could he afford to keep her? Would he agree not to interfere in her politics? Would he be capable of not being jealous of her meeting male politicians? Charming to a fault, Asif gave all the right answers. But that did not convince some of Benazir’s girlfriends, who looked at his beautifully coiffed handlebar moustache with disdain and saw a provincial hick and social climber. Some advised against the match, but others thought she didn’t have much choice. Which is exactly how Benazir saw it. ‘For me,’ Benazir told the Los Angeles Times, ‘the choice was not between a love marriage or an arranged marriage but tween agreeing to this or not getting married at all.’ Her brother Murtaza, cut off in exile in Damascus, watched these developments with dismay. ‘What the hell is she doing?’ he shouted, ‘Stop her! How can she marry Hakim Zardari’s son?’.”

Throughout the marriage, whatever complaints she had about him—and there were many—Zardari delivered for her, perhaps explaining why she described him as “my lion.” TV journalist Daphne Barak, who knew the couple, believed Benazir was “completely and utterly in love with her husband” and always wanted to please. In turn, he was charming and chivalrous. Barak recalled telling Benazir in front of Zardari that the French politician Segolene Dyal resembled her: “Asif responded forcefully and immediately. ‘Nobody is as beautiful as my wife,’ he said. Benazir blushed deeply. She loved him saying that.

“It was a relationship most outsiders could not fathom. Benazir made little secret of how her husband at times hurt her feelings. She revealed some of what she felt in a heart-to-heart with Hillary Clinton in the White House at the height of the Lewinsky scandal. ‘We both know from our own lives that men can behave like alley cats and it is accepted,’ she told Hillary. Divorce was never a possibility, first because it would have been an admission of failure, and secondly because Benazir was too conservative to give up on the marriage. After the years of his imprisonment they both became used to living separate lives, for all that there was a genuine bond to the end.”

Many thought Benazir and Zardari were behind the murder of Murtaza Bhutto. Bennett-Jones cites Shyam Bhatia of The Observer: “Bhutto and Bhatia had known each other at Oxford. The reason they met in 2004 was that she wanted to ask him about a 1989 meeting he had had with her brother Murtaza in Damascus. After Bhatia told a distressed Benazir that Murtaza had repeatedly called her a bitch—something he had not published at the time—she gave him an interview on the nuclear issue, a specialist subject of his.”

Benazir was assassinated by the Pakistani Taliban on Osama bin Laden’s orders: “Baitullah Mehsud had no shortage of recruits willing to mount a suicide attack. Allegedly, one of them was 15-year-old Aitzaz Shah. Bin Laden wondered whether he might be able to leverage the Taliban’s strength and at least associate Al Qaeda with a major attack. He asked one of his most senior operatives in Pakistan, Abu Obaidah al-Masri, to discuss the issue with the Pakistan Taliban leader Baitullah Mehsud.

“Some reports suggest that second senior Al Qaeda operative, Ilyas Kashmiri, was also present at the meeting. The Pakistan Taliban was not in the habit of taking orders from Al Qaeda, but on the question of Benazir the two organizations shared an interest: both believed that the U.S. had tasked her with crushing violent jihadist forces and that she was therefore a threat. Once the decision had been taken, Baitullah Mehsud made no secret of his intention to assassinate Benazir.

“A week before her return, the Pakistani media reported that bin Laden had, according to a Pakistani senator who had met him, sent his people to welcome her. Haji Umar, a Taliban commander in Waziristan, confirmed the Taliban thinking: She has an agreement with America. We will carry out attacks on Benazir as we did on General Pervez Musharraf. Benazir responded with characteristic robustness. Anyone who attacked her, she said, would burn in hell.”