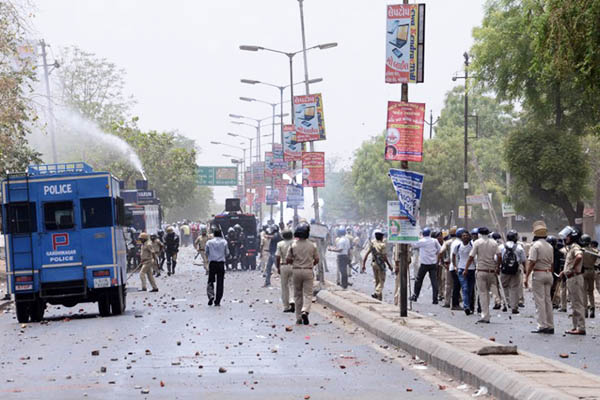 Police also fired water cannon when violence flared after a rally in the Gujarat state town of Mehsana by thousands of members of the Patidar, or Patel, caste.

Television footage showed police armed with sticks known as lathis chasing crowds through the streets after demonstrators tried to march to a local jail where several caste leaders were being held.

Some 25 protesters were arrested and authorities slapped a curfew on the town and blocked mobile Internet access to try to calm the situation, Mehsana district collector Lochan Sahera said. “After the rally the Patidars who had gathered in their thousands started marching towards the district jail and when the police tried to stop them, they pelted stones at them,” said Sahera.

Protesters told media they were hit by police with sticks after taking part in a peaceful rally.

Rioting by Patidar members erupted last year in Gujarat over the same issue, leaving at least 10 people dead in the worst violence to hit the state for more than a decade. The Patidars are one of the western state’s most affluent communities, but they say they are struggling to compete with less privileged castes for jobs.

Local leaders had organized Sunday’s rally to press their demands for changes to the policy by the Gujarat state government and for the release of local leaders.

India sets aside a proportion of government jobs and university places for some castes under measures intended to bring victims of the worst discrimination into the mainstream. But the policy causes deep resentment among other communities, who say it freezes them out.

In February in the northern state of Haryana about 30 people were killed in clashes between police and members of the dominant rural Jat caste over similar demands. Gujarat director general of police P.P. Pandey told AFP that extra police have been deployed in Mehsana but that the situation was now under control.