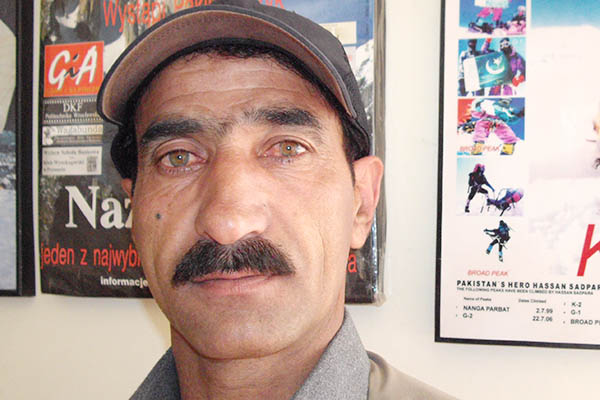 One of Pakistan’s best-known mountaineers, Hassan Sadpara, died of cancer on Monday aged 54, his family said, as Prime Minister Nawaz Sharif paid tribute and his countrymen mourned on social media.

Sadpara was the first Pakistani to scale all five of the country’s “eight-thousanders” which tower above 8,000 meters—among the 14 highest mountains on the planet. That included K2, the world’s second highest mountain but considered a more challenging climb than the highest, Mount Everest, in Nepal—which Sadpara had also climbed.

Sharif spoke of the country’s pride in Sadpara, who leaves three sons and a daughter, as social media was flooded with tributes. “Late Hasan Sadpara’s dedication and self-confidence enabled him to climb highest peaks of the world. The entire nation is proud of his outstanding performance; his endeavors for winning laurels for the country will always be remembered in golden words,” said Sharif in a statement.

“The man for whom no mountain was high enough! #RIP #Hassan Sadpara, legendary mountaineer!” tweeted Faran Rafi, just one of many such messages.

Sadpara, who was born Hassan Asad, came from a small village near the town of Skardu in the mountainous Gilgit-Baltistan region in Pakistan’s north. He began his mountaineering career in 1999 when he conquered Nanga Parbat, also known as the “Killer Mountain.” By 2007 he had climbed all five of Pakistan’s eight-thousanders.

But his fame did not bring him fortune, with his family urging the government to help finance his cancer treatment as they began to run out of money.