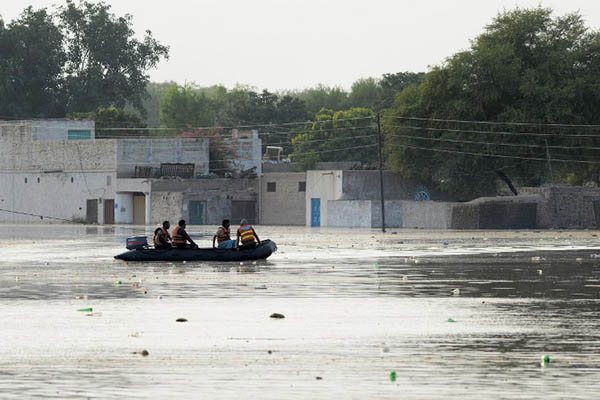 At least 17 people including a bridegroom and two children drowned Sunday when a rescue boat carrying a wedding party capsized in Muzaffargarh, officials said, with the death toll feared to rise. The boat went down in rough waters due to the ongoing flooding in central Punjab province.

Tufail Mohammad, a rescue official, said: “We have recovered the bodies of Muhammad Zahid, the bridegroom, and 16 others.” He said the boat had been carrying 25 wedding guests at the time it capsized. The wedding party had requested use of the rescue boat to take them to a Valima.

Ashiq Malik, medical superintendent of Nishtar Hospital, said: “We have received the bodies of 16 people, including nine members of the groom’s family. The dead also included a military officer.” A military statement confirmed that Assistant Subedar Enaab Khan had died while trying to rescue people after the boat capsized.

A senior government official said an enquiry had been ordered. “The flood caused the deaths, as the rate of water flow increased and caused the boat to become imbalanced,” claimed Mohammad Waseem, an official of the provincial disaster management authority.

The floods and landslides from days of heavy monsoon rains have now claimed at least 480 lives in Pakistan and India. Pakistan, which has suffered a series of annual flood disasters since 2010, says as many as 2.29 million people have been affected.

All person on a boat must wear or carry a life jacket too per international procedure. Above all Life jackets are a must in unpridictable flood waters. Avoid over crowding, travel on twos (2nd boat) if possible. Pakistan produce Plastic for the world… Fiberglass boats and Styrofoam life jackets can be produced in great numbers due to cheaper raw material & manufacturing methods, simple & basic technology. I am shocked to see a country with such a history of floods, a quarter of the population living on flood plains with close to negligible infra-structure found itself without good boat in sufficient quantity when needed.