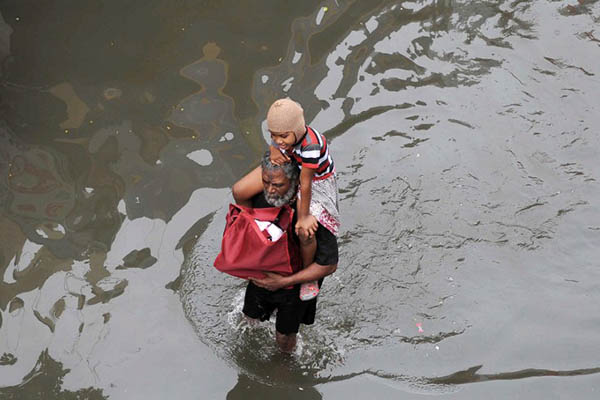 Thousands of rescuers raced to evacuate residents from deadly flooding Thursday, as India Prime Minister Narendra Modi went to the southern state of Tamil Nadu to survey the devastation.

More than 40,000 people have been rescued in recent days after record rains lashed the coastal state, worsening weeks of flooding that has killed 269 people. But many more are still feared marooned, with much of the state capital Chennai—a city of 4.6 million people—submerged, despite a let-up in the rains overnight.

“This rainfall has broken a 100-year record and has created an emergency situation in Chennai,” Home Minister Rajnath Singh told parliament after days of torrential downpours led to a dramatic worsening of the weeks-long crisis. Hundreds of residents in the city waved frantically from rooftops of flooded homes to helicopters hovering overhead, television footage showed.

Thousands of stranded passengers were evacuated from Chennai’s international airport, which remained closed for a second day, its runway under water. National carrier Air India said it would operate special flights from a nearby military airbase to help get stranded passengers out.

Rescuers took advantage of a lull in the rains to pour into the state, joining thousands already there in a race against time to reach those who are stranded. “The situation has improved but we are sending more teams so that we can cover as many areas as possible,” National Disaster Response Force director general O.P. Singh told reporters.

Many in the tech-savvy city took to social media to offer shelter and assistance to victims, or ask for information about loved-ones caught up in the floods. Facebook, which has its second highest number of users in India, activated its “safety check” feature, which allows users to check whether friends are safe after attacks or natural disasters. Chief executive Mark Zuckerberg had said the social network would use the feature more frequently after facing criticism for activating it after last month’s attacks in Paris, but not after blasts in Beirut a day earlier.

India suffers severe flooding every year during the annual monsoon rains from June to September. Experts at the Center for Science and Environment (CSE) in New Delhi said the floods were “a reminder of increasing frequency of such freak weather events across the Indian sub-continent.” But they said poor urban planning had likely exacerbated the scale of the disaster. “We have forgotten the art of drainage. We only see land for buildings, not for water,” said CSE director general Sunita Narain.

The prime minister had cited the floods as a consequence of climate change in his weekly radio address on Sunday, a day before meeting other world leaders at a global climate summit in Paris. He has repeatedly called on developed countries to do more to combat the impact of global warming on the world’s poor, who experts say will be disproportionately affected.

On Thursday he said he had witnessed “the damage and misery caused by the extremely heavy rainfall” after touring the area by helicopter, and promised more government aid. A naval warship loaded with inflatable boats, medical supplies and diving equipment arrived in Chennai on Thursday.

Poor phone networks were hampering rescue efforts, while washed out bridges were slowing delivery of relief supplies, National Disaster Management Authority senior official Anurag Gupta said. “Our top priority is to rescue marooned people on the first and second floors and getting them to safer, drier places,” he told AFP.

Authorities asked private companies to declare Thursday and Friday a holiday for workers due to the flooding in Chennai, a center for auto manufacturing and IT outsourcing. Factories for Hyundai, Ford and Renault had already reportedly been forced to halt operations as the waters rose.