by AFP and Newsweek Pakistan November 5, 2015 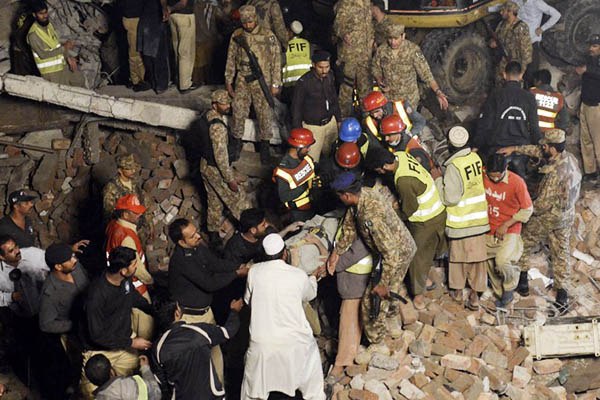 At least 18 people dead, with an unknown number still trapped beneath rubble following the disaster.

Rescuers in Lahore have pulled over 100 people out alive from the rubble of a collapsed factory and are searching for dozens of others believed still trapped in a disaster that has killed at least 19, officials said Thursday.

Soldiers and rescuers were carefully cutting through steel and using cranes to lift the debris of the building which came crashing down Wednesday night, less than two weeks after a 7.5 magnitude earthquake rocked the region. The factory may have suffered structural damage in the Oct. 26 quake, which killed almost 400 people across Pakistan and Afghanistan, Punjab Chief Minister Shahbaz Sharif said.

“I have heard about the earthquake affecting the building, but according to laborers the owner continued to build an extension,” he told reporters.

One worker still trapped in the rubble told SAMAA TV early Thursday that he is pinned under a girder, but alive and feeling thirsty. Families on the scene were struggling to reach the site, crying and at times scuffling with police and soldiers holding them back. “I have to go there, even if they are going to shoot me,” one elderly man said.

It was unclear how many people were in the building when it collapsed or how many—dead or alive—may still be trapped. Officials have put the total number of those involved at around 150, but workers said it might have been higher.

Late Wednesday rescuers said around 70 people had been rescued and that up to 100 people were still trapped in the rubble with some crying for help, but updated accounts indicated the number of missing was in the dozens.

Mohammad Usman, the top administration official in Lahore who is coordinating the response to the disaster, said 99 people had now been rescued and that they expected to find a “couple” more survivors. “Just 30 minutes ago we pulled another guy out alive,” he told AFP.

Most of the survivors were injured and chief doctor Zia Ullah at Jinnah Hospital, where some were taken, said most of the victims were young workers, with many suffering head injuries and fractured limbs.

The collapse occurred at the four-storey Rajput Polyester polythene bag factory in the Sundar industrial estate, around 45 kilometers southwest of Lahore’s city center.

Jam Sajjad Hussain, a spokesman for the rescue services, said Wednesday that all the city rescue workers were on site “but it is such a big incident that we have called rescue workers from other nearby districts.”

Mohammad Tauheed, one of the rescue officials, told Newsweek laborers had told him there were around 300 laborers, including children, at the factory at the time of the collapse. “We believe there are over 100 people still trapped beneath the rubble,” he said.

According to Tauheed, one of the laborers, Azhar, had to have his legs amputated to save him. “Both his legs were crushed under the rubble,” he said.

Riaz, an injured laborer, said he was on the third floor when the factory collapsed. “It felt as if another earthquake had hit us. I shouted at the other laborers to evacuate, but the building collapsed before we could get out,” he added.

The Army said it was deploying specialist search teams and engineers to help the rescue effort. Three cranes, a bulldozer and more than 40 emergency rescue vehicles were working at the site, a rescue official said.

But provincial spokesman Zaeem Qadri told reporters that progress was slow because the factory was at the end of a narrow lane making it difficult for excavators to reach the site. He added that an emergency has been declared at all local hospitals.

Pakistan has a poor safety record in the construction and maintenance of buildings. At least 24 people died last year when a mosque collapsed in the same city, while more than 200 people lost their lives, mostly due to collapsed roofs, following torrential rain and flooding in 2014.

In 2012, at least 255 workers were killed when a fire tore through a clothing factory in Karachi, one of the deadliest industrial accidents in Pakistani history. A judicial probe into the blaze was damning, pointing to a lack of emergency exits, poor safety training of workers, the packing in of machinery and the failure of government inspectors to spot any of these faults. A murder case was registered against the factory owners, but it has never come to trial.