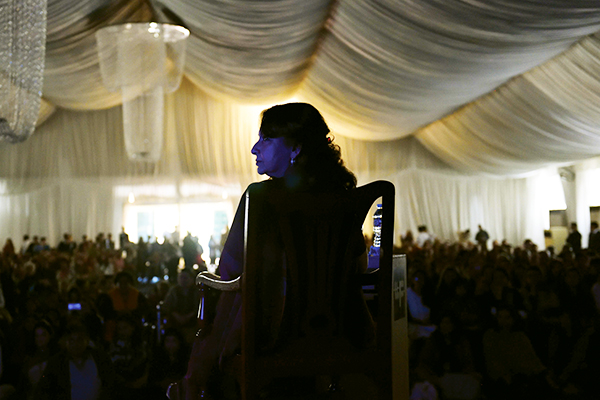 The fourth edition of the Lahore Literary Festival, of which I was a part, offered a rich and exciting program that brought together artists and thinkers from all over the world to exchange ideas and engage with each other and with the historic city’s generous audiences. LLF represents a form of cultural diplomacy that complements and improves the environment for state-to-state relations and affords opportunities that politics simply cannot.

Literature and the arts are timeless and borderless. Works from our subcontinent defy and effortlessly transcend the fraught relationship between India and Pakistan. They light the way.

Talented Pakistanis writing in English—like H. M. Naqvi and Mohammed Hanif—have been championed by Indian publishers. The verse of Faiz Ahmed Faiz, Ahmad Faraz, Gulzar, and the music of Nusrat Fateh Ali Khan and Coke Studio are embraced across the political fault line. Mehdi Hassan’s “Ranjish hi Sahi” or Farida Khanum’s “Na Rawa Kahiye, Na Saza Kahiye” don’t bring up borders or nationalities in the heart or mind of the listener, just emotions. As generations of Pakistanis have grown up to the music and marvel of Bollywood, Pakistani television series—from Dhoop Kinare in the 1980s to Humsafar and beyond—have found fanatic fans in Indians. Fashion designers of both countries take inspiration from and tap into our common, centuries-old traditions of textiles and design.

India and Pakistan have a shared if complex history. By focusing on our common cultural heritage—apparent in our best literature, film, music, fashion, food, architecture—we can only get to know each other better, understand each other more, and develop a common worldview. There can be no better bridge between us than our stories and storytelling.

On the page, stage or onscreen, stories rise above partisanship and politics because they are often personal perspectives. They give voice to those who are not adequately or truthfully represented in mainstream discourses. Stories empower people (and I have seen up close how some stories have impacted the lives of women in particular).

South Asian literature is peopled with strong, complex female characters at its heart. Rabindranath Tagore’s Binodini in Chokher Bali, Charulata in Nastanirh, and Labanya in Shesher Kabita were real women who belonged to the world as much as men did, even though that notion probably disturbed some of his readers. In Bombay Stories, Saadat Hasan Manto depicted sex workers without judgment or patronization, not as fallen women but as self-aware and often free-spirited human beings. Ismat Chughtai’s stories and Arundhati Roy’s The God of Small Things are also examples of how literature empowers women by challenging extant notions. Encouragingly, female characters continue to be written fearlessly into our literature.

Things get a little more complicated with cinema. The process of filmmaking is expensive and widely collaborative. So popular cinema tends to privilege commerce over art, and the involvement of several stakeholders tends to inhibit the impulse for an honest and credible reflection of social realities. The solitary poet or writer is freer from such limitations and can more openly reflect the world as they see it in their work.

However, Indian cinema has also been at the service of literature by taking inspiration from classics (like Satyajit Ray’s Apu Trilogy and his adaptations of Tagore’s novels) and bringing them to a wider audience (Sarat Chandra Chatterjee’s Devdas has 15 film versions, including the upcoming Aur Devdas). The high point of Indian cinema, from the late 1940s through the early 1960s, is recalled as the Golden Era precisely because filmmaking of the time depended so much on authors and poets whose stories and lyrics gave cinema a social edge and poetic expression. At the core of this era’s films was the marriage of Hindi and Urdu. The collaboration of the kinds of great minds and the fusion of our shared cultures that this era represented are long past and fading further. In the absence of sustained engagement, our history becomes obscured, twisted, erased, and forgotten. The burden of re-familiarizing us with that history falls to storytellers.

Memories are short and don’t necessarily pass from one generation to the next, so there can never be enough stories, especially about controversial or unpalatable events that have impacted history. Great works of literature and cinema endure and have the unique power and ability to remind—of the progress we have made, and the progress that still needs to be made. Literature and cinema can explore our histories and shared spaces and lay bare the entanglements and contradictions to give silence a voice. Continuous and thriving literary traditions are crucial for a sobering, sane relationship with one’s history and society in order to build a balanced and informed future for ourselves and our children.

The trauma of Partition hurt Urdu. Once Delhi’s principal language, it became the tongue of the “other” and is no longer dominant here. It is Pakistan’s official language even though it originated from outside of what is today Pakistan. Such polarization meant that we suddenly lost the tradition of reading and writing in languages that were used locally for many centuries. For better or worse, perhaps the most prominent unbroken tradition we seem to now have is linked to our shared colonial past. (We are all more familiar with Shakespeare than with his South Asian contemporaries.)

What can keep our collective memory and shared heritage alive? What does it take now to remember and come to terms with an event of the magnitude of Partition? The memory of that time is dying out generationally, but the ghosts of it continue to haunt us. Can literature really be the means for never forgetting or is it primarily an academic and scholarly task? With no public museums or comprehensive archives concerning Partition, these stories will soon be lost.

Storytelling is nothing if not a mirror to our everyday lives, to society, to home and to the idea of home. I am convinced that the subcontinent can once again become a place that shares ideas above everything else.

If this sounds nostalgic, that is intentional. Cynicism and sarcasm may be the new popular virtues, but nostalgia has its uses—not as a sentimental or passive harking back, but as a rallying cry for a better future.

“Nostalgia” comes from the Greek to describe the pain of returning home. Let us foster our dialogue with history through platforms like the LLF. Let us be more aware of our shortcomings. Let us always contribute in our daily lives, even in the smallest way, toward building a shared language that is inclusive rather than exclusive. Let us, together, ease each other’s pain and return home.

Tagore, an acclaimed actress, spoke at the Lahore Literary Festival (LLF) last month. She lives in New Delhi. From our March 12-19, 2016, issue.

Now I Am Out, Only wish U So Much Well! Always on Friday Prayers, On my mind 4 Good Future Life . You can Believe on this.