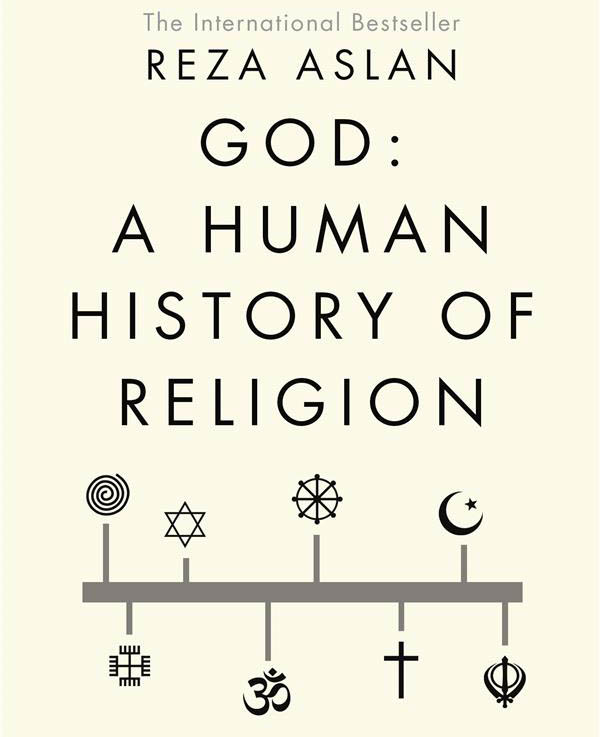 Four years since the publication of ‘God: A Human History’, the author’s insight into monotheism continues to prove a fount of knowledge

Reza Aslan is an Iranian-American scholar of the sociology of religion. A convert to evangelical Christianity from Shia Islam as a youth, he eventually reverted to Islam but has written extensively about all major global religions. His book God: A Human History of Religion (2017) continues to be a treasure of information about monotheism. (Aslan lectured to great acclaim at Lahore Literary Festival in February 2019.)

“Religious belief is so widespread that it must be considered an elemental part of the human experience. We are Homo religious, not in our desire for creeds or institutions, nor in our commitments to specific gods and theologies, but in our existential striving toward transcendence: toward that which lies beyond the manifest world, if the propensity for religious belief is inherent in our species, then, scholars reasoned, it must be a product of human evolution. There must be some adaptive advantage to it. Otherwise there would be no reason for religion to exist.”

For a great many people, religion helps make sense of a mystifying and volatile existence. The question is what, if any, adaptive advantage it would have provided primitive human beings in their early development. How exactly do these soothing yet ever-shifting answers to the mysteries of the universe support the survival of the species?

Freud and Jung on religion

According to Aslan, Sigmund Freud and Carl Jung—two of the most famous pioneering theorists—sought to locate the origins of the religious impulse within the human psyche, in the blurred space between our conscious and unconscious minds. Indeed, both men equated the soul with the psyche. Unlike Jung, however, who had a generally positive view of religion and sought briefly to “psychologize” traditional religious concepts like the soul, Freud considered religion to be a neurosis: a mental disorder that fosters belief in invisible, impossible things and leads to compulsive actions and obsessive conduct.

A variation of Freud’s theory holds that religion’s primary purpose in human evolution is to motivate altruistic behavior, to control primitive populations and keep them from tearing each other apart. Writes Aslan: “In other words, the only thing stopping Adam from rising from his seat by the fire, stabbing his neighbor in the chest, and taking his meat from him is his belief that the spirits of his ancestors are watching him. They act as divine lawgivers compelling him to act morally or risk punishment. By promising a reward in the afterlife, religion compels him to restrain or alter his actions in some manner and so mitigates the social effects of selfishness among individuals in a group.”

In the Indus Valley, the Lord of Beasts has been associated with both the Zoroastrian god Ahura Mazda and the Hindu deity Shiva, especially in his incarnation as Pashupati, or Lord of All Animals. Enkidu, the hirsute hero in the Babylonian Epic of Gilgamesh—one of the world’s first written myths—is a Lord of Beasts, as is Hermes, and sometimes Pan, the half-goat, half-man god of nature, in Greek mythology

Even the Hebrew god Yahweh is occasionally interpreted as the Lord of Beasts in the Bible. The book of Job depicts Yahweh boasting of the power to let the wild ass go free, of compelling the ostrich to leave its eggs on the earth so they can be gathered by men, and of ordering the wild ox to let itself be harnessed with ropes and set to harrow the valleys at man’s command (Job 39). In the modern world, certain Wicca devotees and neo-pagan adherents worship the Lord of Beasts as the Horned God.

Aslan comments on two separate creation stories written by two different hands: Genesis chapter 1, in which man and woman are created together and simultaneously; and Genesis chapter 2, the much more popular Adam and Eve story, in which Eve is made from Adam’s rib. There are also two different flood narratives. Though, unlike the two creation stories, these are woven together to create a single, conflicting account in which the flood lasts either 40 days (Genesis 7:17) or 150 days (Genesis :24); the animals are brought aboard the Ark in either seven pairs of male and female (Genesis 7:2) or just one pair of every kind (Genesis 6:19); and the flood begins either seven days after Noah enters the Ark (Genesis 7:10) or immediately after he boards with his kin (Genesis 7:11-13).

Although the Yahwist material is about a hundred years older than the Elohist, the latter tradition represents the older deity. In fact, while we know next to nothing about the origins of Yahweh save that he was likely a Midianite deity, El is one of the best-known and most well-documented deities in the Ancient Near East.

The mild, distant, fatherly deity traditionally depicted either as a bearded king or in the form of a bull or calf, El was the High God at Canaan. Known as the Creator of Created things and the Ancient of Days, El also functioned as one of Canaan’s chief fertility gods. But El’s primary role was as the celestial king who served as father and preserver of the earthly kings of Canaan. Seated on his heavenly throne, El presided over a divine council of Canaanite gods that included Asherah, the Mother Goddess and El’s consort; Baal, the young storm god known as the Rider of the Clouds, the warrior deity; Astarte, also called Ishtar; and a host of other, lower deities. El was also unquestionably the original god of Israel. Indeed, the very word Israel means “El perseveres.”

(Note: The meaning of Israel as “Jacob wrestling with God” is described in Genesis (32:22–32; also referenced in Hosea 12:3–5). The “angel” in question is referred to as “man” and “God” in Genesis, while Hosea references an “angel.” The account includes the renaming of Jacob as Israel etymologized as “contends-with-God.” Today “Isra” in Arabic means to wrestle. In the Genesis narrative, Jacob spent the night alone on a riverside during his journey back to Canaan. He encounters a “man” who proceeds to wrestle with him until daybreak. In the end, Jacob is given the name “Israel” and blessed, while the “man” refuses to give his own name. Jacob then names the place where they wrestled Penuel (“face of God” or “facing God”).

The early Israelites worshiped El by many names—El Shaddai, or El of the Mountains (Genesis 17:1); El Olam, or El Everlasting (Genesis 21:33); El Roy, or El Who Sees (Genesis 16:13); and El Most High (Genesis 14:18-24), to name a few. And while it may seem incongruous that the Israelites living in Canaan could have so eagerly adopted a Canaanite god as their own, the influence of Canaanite theology runs deep in the Bible—so deep, in fact, that it isn’t always so easy to draw a clear distinction ethnically, culturally, or even religiously between the Canaanites and the Israelites, certainly not in the early history of Israel (c. 1200).

According to tradition, Islam’s Prophet was meditating in a cave in Mount Hira when he was seized by an invisible presence commanding him: “Recite.” What followed that initial experience was 22 years of nearly uninterrupted prophetic revelations “from a god he called Allah—revelations that would eventually be collected into what is now known as the Quran, or the Recitation.”

The ancient Arabs were already familiar with Allah, a name likely attributed to the Arabian equivalent of the Indo-European deity Dyeus, or its Greek counterpart Zeus: that is, as a sky god who steadily rose through the ranks of the Arab pantheon to become High God. But it’s unclear whether the Arabs thought of Allah as a personalized deity or as a kind of abstract spirit, somewhat akin to the divine force that the ancient Egyptians and Mesopotamians believed underpinned the universe. Allah is not a proper name, after all, but a contraction of the Arabic word al-Ilah, meaning simply, “the god”—an indication that Allah may have been viewed more as divine spirit than as divine personality. And unlike the hundreds of other deities recognized by the ancient Arabs, Allah seems never to have been represented by an idol, which would make sense if he was perceived as an animating spirit without physical form.

At the same time, the Arabs credited Allah with being the creator of the heavens and the earth, so they clearly ascribed will and intention to the deity. They thought of Allah as a material being who, like Zeus, had sired both sons and daughters. Indeed, pre-Islam Allah’s three daughters—Allat, who was associated with the Greek goddess Athena; Manat, who was likely connected with the Mesopotamian goddess Ishtar; and al-Uzza, who was the Arab equivalent of Aphrodite—played a central role in ancient Arab spirituality as Allah’s intermediaries.

The ancient Arabs had little use for an abstract deity they could neither see nor interact with in their day-to-day lives. The Arab pantheon was littered with a host of gods and goddesses, angels and demons, and djinn, all of whom served the specific needs of their desert worshippers and nearly all of whom were conceived of in unambiguously human terms.

The gods of the Arab world ate and drank, had sex and sired children, wore clothes and carried weapons (the goddess Manat wore two hats of mail and carried two swords). Most of these gods, save Ilah, were carved in stone to look like human beings (or occasionally some other living creature) and housed inside Mecca’s central sanctuary, the Kaaba, where they could be visited by Arabs across the region bearing gifts and sacrifices in exchange for their favors and blessings.

And nowhere is that influence more evident than in Islam’s unqualified acceptance of the Jewish understanding of God as singular and indivisible. “Allah is One,” the Quran states emphatically. “Allah is Unique. He has neither begotten anyone, nor is he begotten of anyone. And there is none like Him” (Surah 112:1-3).

At the center of Islam’s revelations was a kind of doubling down on the very concept of monotheism, which in Islam is founded upon a complex theological idea called “tauhid.” Arabic for “making one”, “tauhid” is less an affirmation of God’s singularity than it is a description of God’s essence. It does not mean there is only one God; it means that God is, in form and nature, Oneness.