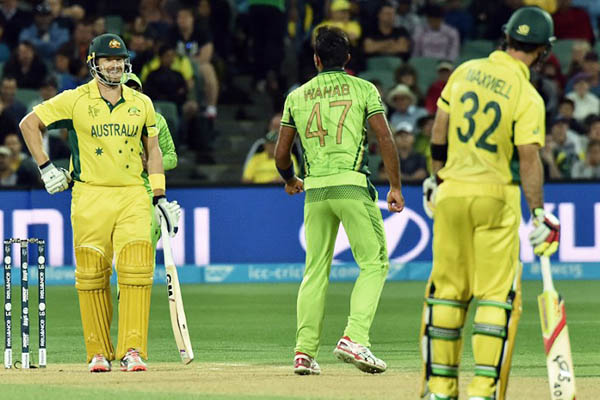 Pakistani Riaz has been charged with using obscene language, while Australian Watson is accused of conduct contrary to spirit of game.

Pakistan fast bowler Wahab Riaz was fined 50 percent of his match fee while Australian all-rounder Shane Watson was penalized 15 percent of his after their angry clash in Friday’s World Cup quarter-final.

Riaz was charged with using obscene language, while Watson was accused of conduct contrary to the spirit of the game when the two faced each other down in a compelling passage of play during Australia’s six-wicket win at the Adelaide Oval.

“The incident happened in the 33rd over of Australia’s innings when Watson ignored the umpires’ instructions and verbally engaged with Wahab, who, at the end of the over, followed through towards the batsman and used aggressive and abusive language,” said an International Cricket Council statement. “Both the players admitted the offences and accepted the sanctions and, as such, there was no need for a formal hearing.”

Match referee Ranjan Madugalle said: “It was an enthralling contest between Shane and Wahab, but in the closing stages of the match both players crossed that fine line between intense competition and unacceptable behavior, and this resulted in the sanctions.”

Australia will face defending champions India in a semi-final in Sydney on Thursday.