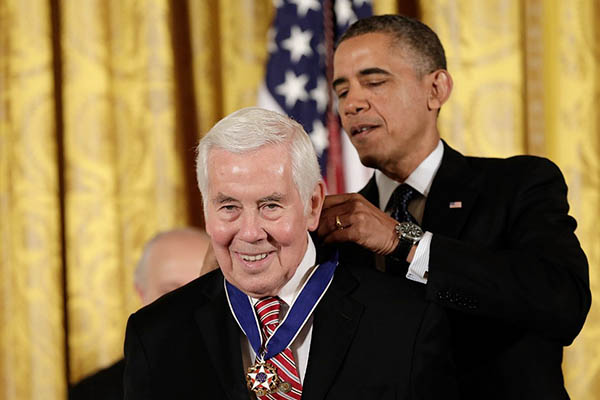 Senator Richard Lugar, a leading U.S. voice on foreign policy for decades and a onetime presidential candidate known for his civility and bipartisan ways, has died at a medical center in Falls Church, Virginia. He was 87.

Lugar died of chronic inflammatory polyneuropathy, according to a statement from the Lugar Center in Washington, a global policy institute that he founded in 2013.

A soft-spoken Republican moderate, Lugar was twice chairman of the Senate Foreign Relations Committee and built a reputation as one of Washington’s most influential foreign-policy voices during the record six terms he represented Indiana in the Senate. That reputation was burnished by his willingness to work across party lines, most famously when he joined Democratic senator Sam Nunn in 1991 to forge what became known as the Nunn-Lugar program to help former Soviet republics dismantle their nuclear arsenals.

In a statement, Vice President Mike Pence—former governor of Indiana—mourned the loss of “one of our greatest statesmen.”

“Senator Lugar’s contributions to the life of our nation are countless,” he said.

“America has lost a true statesman in Dick Lugar,” tweeted Pete Buttigieg, another Indiana native and current Democratic presidential aspirant. “A great mayor, senator and mentor, he made the world safer, stood up for better foreign policy, and knew how to work across the aisle.”

Buttigieg, who at 37 is mayor of the Indiana city of South Bend, is in a way following in the footsteps of Lugar, who became mayor of state capital, Indianapolis, at 35.

Then-president Barack Obama awarded Lugar the Presidential Medal of Freedom in 2013 for his “decency [and] his commitment to bipartisan problem-solving.”

“For thirty-six years, Richard Lugar proved that pragmatism and decency work—not only in Washington but all over the world,” the former president said on Sunday. “Michelle and I send our warmest sympathies to his family and all those who had the privilege of knowing this American statesman.”

Lugar was a leader in pressing South Africa to end apartheid, and earlier in the campaign to oust the authoritarian Filipino president Ferdinand Marcos—having to overcome opposition from President Ronald Reagan on both issues.

Lugar sought the Republican presidential nomination in 1996, saying he wanted to see whether “serious talk” on the issues could prevail over “sound bites.”

But the bookish Lugar—as a Rhodes scholar he earned an honors degree from Oxford in 1954—wryly acknowledged that charisma was hardly his strong suit and he ultimately withdrew from the 1996 race.

Despite his longtime popularity in Indiana, Lugar ran into trouble when he sought a seventh Senate term.

A Tea Party-backed Republican, Richard Mourdock, portrayed him as overly liberal and out of touch, and soundly defeated him in the party’s primary (Mourdock was then defeated by a Democrat, Joe Donnelly.)

After leaving the Senate, Lugar continued to work on nuclear nonproliferation issues, global hunger and energy conservation. He is survived by his wife Charlene, whom he married in 1956, and by four sons.