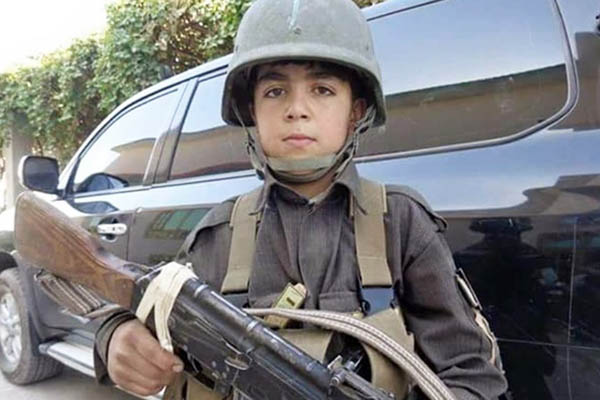 The Taliban killed a 12-year-old boy months after he left a militia force combating the extremists.

Rights groups on Thursday condemned the use of child combatants in Afghanistan after the Taliban shot dead a 12-year-old boy who rose to fame last summer when he joined a militia to fight the insurgents.

Wasil Ahmad was shot in the head twice by Taliban militants riding a motorcycle as he made his way to school in the volatile city of Trin Kot, capital of southern Uruzgan province, months after leaving a militia force and enrolling in the fourth grade.

The preteen had become a poster-child for pro-government forces after he reportedly helped his uncle and other militia fighters break a Taliban siege last summer in his home province. Pictures circulating on social media showed Ahmad wearing a helmet and a uniform that was several sizes too large for him as he grasped an assault rifle.

The Taliban, who have been waging an insurgency against the government since being driven out of power by U.S.-led NATO forces in 2001, claimed responsibility for the killing.

“It’s such an appalling, tragic case,” said Patricia Gossman, senior Afghanistan researcher at Human Rights Watch. “There were two crimes in this case: that he was killed, and that a child his age was fighting at all,” she added. “One side made him a hero and the other side killed him. Both sides ignored the law and acted illegally,” added Rafiullah Baidar, spokesman for the Afghan Independent Human Rights Commission added.

Rights groups have been warning for years that child recruitment remains rife in Afghanistan both by the Taliban insurgents and pro-government militia forces.

Wasil’s uncle, Mullah Abdul Samad insisted however that Ahmad had taken up arms voluntary to avenge his father’s death. “Nobody encouraged him, he wanted revenge,” he said.