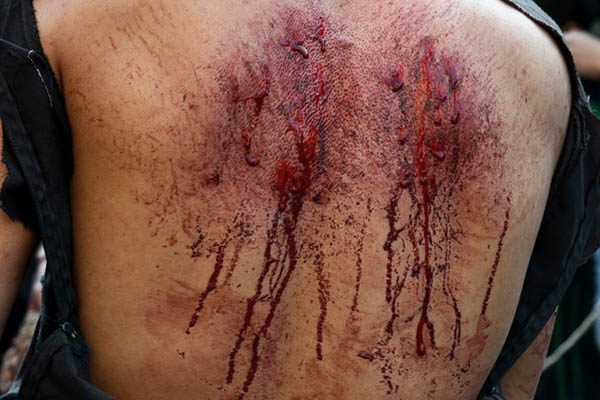 A couple convicted of adultery was publicly flogged, provoking outrage.

Rights groups have condemned the public flogging of a man and a woman convicted of adultery in Afghanistan, calling for an investigation into the “abhorrent” incident, which sparked anger online.

Public lashings and executions were common under the Taliban’s 1996-2001 rule, when a strict interpretation of sharia law was enforced, but such incidents have been rare in recent years.

An online video from central Ghor province appears to show a woman—covered head to toe in a veil and huddled on the ground—receiving lashes from a turbaned elder in front of a crowd of male spectators. The flogging came after a court in Ghor found her guilty of having sex outside marriage with a man, who was also similarly punished.

“The public flogging… for ‘adultery’ is abhorrent and Afghan authorities must hold to account those responsible,” Amnesty International said in a statement. “Reports that this horrific punishment of 100 lashes was handed down by a primary court that is part of Afghanistan’s formal justice system are deeply worrying.”

But the sentencing was backed by the provincial government, headed by one of Afghanistan’s few female governors. “This punishment is based on sharia law and will teach others a lesson to not commit adultery,” Ghor’s governor Seema Joyenda told AFP.

The video of the flogging, widely circulated on social media, triggered furious reactions online and was also condemned by Human Rights Watch.

“The punishment of lashing is illegal… but Afghan courts hand out corporal punishment with sufficient regularity that district judges have been known to keep a lash hanging in their office,” said Heather Barr, a senior researcher on women’s rights in Asia with the group.

In March a woman named Farkhunda was beaten and set ablaze in central Kabul after being falsely accused of burning a Quran, provoking global criticism. Farkhunda’s case become a symbol of the endemic violence that women face in Afghanistan, despite reforms since the hardline Taliban regime fell in 2001.