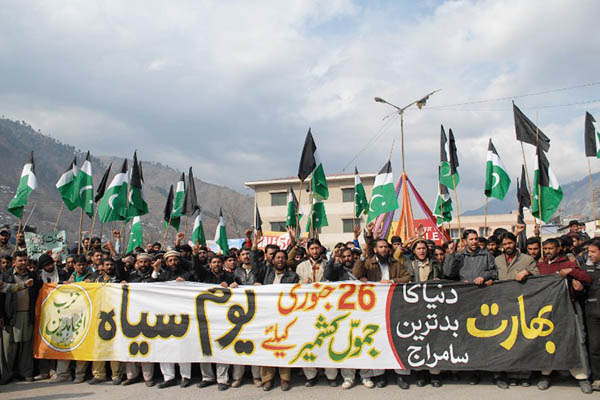 Jamat-ud-Dawah and Jaish-e-Mohammad are planning mass demonstrations on Feb. 5.

Pakistani organizations with links to banned militant groups are planning mass public demonstrations on Kashmir Solidarity Day, raising questions about the effectiveness of government restrictions placed on them.

Kashmir Solidarity Day has been observed every Feb. 5 since 1991 after Jamaat-e-Islami chief Qazi Hussain Ahmed proposed it a year earlier. The public holiday expresses Pakistan’s support for the right of Kashmiris to self-determination and usually includes mass rallies from various sectors of society. It has often been a sore point in Pakistan-India relations, as the mass rallies tend to focus on action against Indian-administered Kashmir.

This year promises to be no different with the Hafiz Saeed-led Jamat-ud-Dawah, widely seen as the charity wing of the militant Lashkar-e-Taiba, planning demonstrations nationwide. India has long accused Taiba of staging attacks on Mumbai in 2008 that killed 166 people and has demanded Islamabad try Saeed for his alleged role in the tragedy. Islamabad claims New Delhi has been unable to provide sufficient evidence to prosecute Saeed in court.

Pakistan’s troubled association with Jamat-ud-Dawah is nothing new. Then-president Pervez Musharraf outlawed Taiba in 2002. The militant outfit promptly rebranded as Jamat-ud-Dawah—a common tactic for banned groups in Pakistan looking to circumvent state sanctions. In 2008, after the U.N. Security Council added Saeed and four senior Taiba leaders to a sanctions list, Islamabad froze Jamat-ud-Dawah’s bank accounts, and placed Saeed under arrest. The detention was short-lived and Jamat-ud-Dawah claims it currently has no restrictions on its operations.

“Mr. Saeed and four other members [of Taiba] have been proscribed, not our entire organization,” said Jamat-ud-Dawah spokesman Yahya Mujahid. Pakistan’s High Commissioner in New Delhi Abdul Basit has also said that the existing sanctions are limited. “Their funds are frozen, there is an arms embargo and they can’t travel outside Pakistan,” he said.

Efforts to curtail their online presence have yielded mixed results. In December, six months after the U.S. formally sanctioned the group, social media site Twitter suspended the group’s “official” account, hoping to deprive it of a platform it often uses to promote an anti-India narrative, as well as to raise funds. Within hours, the group was back online with a tweaked handle—@JUD_Official01. Twitter took that down as well—to no avail. The group is already back on Twitter under the handle @JamatDawah.

The Pakistan government’s recent claims that any inciting groups would be dealt with severely also appear to have failed and there appears to be no bar on Jamat-ud-Dawah’s right to assembly. On Jan. 25, the “banned” group led a 12,000-strong demonstration in Lahore against the publication of a caricature of Islam’s Prophet in French satirical magazine Charlie Hebdo. Organizers say they plan to take that demonstration nationwide in the coming weeks with more protests planned in Lahore, Karachi, Hyderabad, Rahim Yar Khan and Multan.

But Jamat-ud-Dawah isn’t the only extremist group planning to come out on Kashmir Day. Another major participant of this year’s demonstrations is Maulana Masood Azhar’s Jaish-e-Mohammad. The Kashmir-focused militant group is accused of an armed raid on the Indian Parliament in 2001 and, like Taiba, has been banned in Pakistan since 2002. Unlike that group, Jaish—which rebranded as the Khuddam ul-Islam—keeps a low profile and is primarily active only in Kashmir.

In January 2014, Azhar addressed an anti-India rally in Muzaffarabad, capital of Pakistan-administered Kashmir, but has drawn little public attention since. This year, however, a senior commander of the group says it will join hands with Jamat-ud-Dawah on Feb. 5.

“We are not going as Jaish,” says the commander, on condition of anonymity. “We are going to participate in a closed door event organized by Saeed on Karachi’s University Road,” he added. He said Azhar, believed to be in Kashmir, would not be attending.

“Pakistani organizations with links to banned militant groups” Has JuD Carried out subversive activities inside Pakistan?