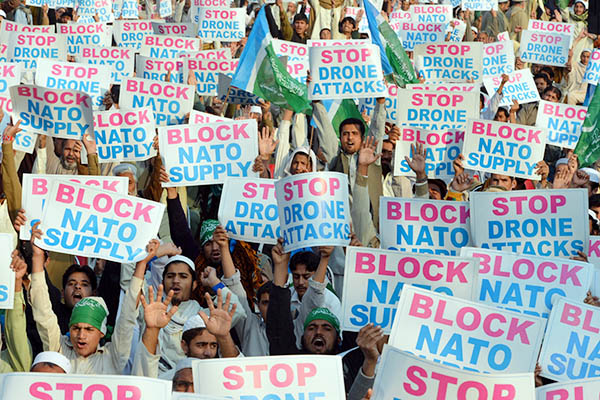 Protesters in Peshawar block NATO convoy; those in Lahore demand the Pakistani government shoot down drones.

Rightwing political parties and fringe groups led protests on Friday to denounce the Nov. 1 drone strike that killed the leader of the Pakistani Taliban, Hakimullah Mehsud, and to demand an end both to drone strikes and Pakistani cooperation to U.S.-led forces in Afghanistan.

Around 1,200 supporters of the Jamaat-e-Islami party staged a sit-in on Friday, blocking a NATO supply route in Peshawar. “America does not want a peaceful Pakistan, it is against peace talks, the government should shoot down U.S. drones,” Shabeer Ahmad Khan, a Jamaat leader told the gathering. The Jamaat chief, Syed Munawar Hasan, has recently declared killed Mehsud a “martyr” and said that the honorific does not apply to Pakistan Army soldiers killed in battle with the Taliban because they are acting at the behest of “enemy” America.

Mohammad Ismail, a senior police officer in Peshawar, said the road would soon reopen. “It is temporary due to the protest rally, [NATO] supplies will reopen on Saturday,” he said.

In Lahore, more than 200 activists of Jamat-ud-Dawah, blacklisted as a terrorist organization by the U.N. and U.S., gathered outside the press club and chanted slogans against the U.S. Jamat-ud-Dawah also held a small rally in Karachi.

Islamabad reacted angrily to the drone strike that killed Tehreek-e-Taliban Pakistan chief Mehsud in North Waziristan. The government said the strike had destroyed efforts to begin talks to end the Taliban’s bloody six-year insurgency that has left thousands of soldiers, police, and civilians dead. The interior minister, Chaudhry Nisar Ali Khan, accused Washington of sabotaging peace efforts and said ties with the U.S. would be reviewed.

Islamabad condemns drone strikes as a violation of Pakistan’s sovereignty, and Prime Minister Nawaz Sharif urged U.S. President Barack Obama to end them during their meeting at the White House on Oct. 23. But analysts say Sharif’s ability to issue demands to Washington are constrained by the fact the U.S. last month agreed to release around $1.6 billion in aid. In addition, Pakistan has just embarked on a new $6.7 billion International Monetary Fund loan package with support from Washington.

Imran Khan, head of the Pakistan Tehreek-e-Insaf party, called for a blockade of NATO convoys to Afghanistan. His PTI has set a Nov. 20 deadline for the halting of drone strikes and threatened to block convoys in Khyber-Pakhtunkhwa province, where the party leads the coalition government. But it is not clear how such a blockade would be carried out as authority over highways lies with the federal government.

Pakistan is a key transit route for the U.S.-led mission in landlocked Afghanistan, particularly as NATO forces withdraw by the end of next year. Many of the trucks now are actually removing NATO equipment after 12 years of war.

Mehsud’s death last Friday was the third major blow struck against the Pakistani Taliban by the U.S. this year, following the killing of their No. 2, Wali-ur-Rehman, in a drone strike in May, and the capture of another senior lieutenant in Afghanistan last month. On Thursday, the Pakistani Taliban named its new leader, the hardline Maulana Fazlullah, known for leading the Taliban’s bloody two-year rule in Swat.