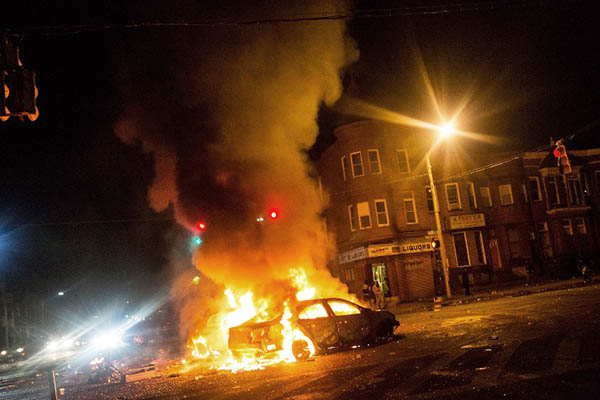 Police say situation is calming down, but a curfew will be in place from tomorrow night to maintain peace.

Thousands of police and National Guard troopers were ordered to back up beleaguered officers in Baltimore on Tuesday after riots triggered by anger over the death of a black man in police custody.

After an evening of violence, officials said calm appeared to be returning to the city as Monday gave way to Tuesday. At least 27 people were arrested and 15 police injured as stone and brick-throwing mobs, many of them high school students, clashed with law enforcement and attacked local businesses.

The state of Maryland declared a state of emergency after furious rioters looted businesses, ransacking shops and stealing armloads of merchandise, and torched cars.

The violence is the latest in a series of confrontations between U.S. police and mainly young African-American men enraged by what they see as racism in the force. Last summer’s fatal shooting of unarmed teenager Michael Brown by a white police officer in Ferguson, Missouri triggered coast-to-coast protests.

The unrest in Baltimore started after the funeral of a black man who died April 19 of spinal injuries apparently suffered during his arrest this month. Despite appeals for calm from 25-year-old Freddie Gray’s family, roving gangs of youths fought street battles with police that left 15 officers hurt, six of them seriously. Several news reporters were assaulted and had equipment stolen.

Police said they were combing through video footage to identify other possible offenders after 27 people were arrested during the violence. But as flames continued to light up the night sky bright orange in the early hours of Tuesday, police said calm was returning.

“I think for the vast majority the city is calming itself down slowly but surely, other than the car fires and the street fires,” police chief Anthony Batts told a news conference shortly before midnight, urging parents to “take control of your kids.”

Baltimore Mayor Stephanie Rawlings-Blake declared a curfew starting Tuesday night, while city schools said they would remain closed for the day. While most of the violence was in the west of the city, as night fell, a large building was also ablaze on Baltimore’s east side.

Maryland police superintendent Colonel William Pallozzi said he had ordered 500 police to the city and requested 5,000 more from the broader Mid-Atlantic region. And National Guard commander Adjutant General Linda Singh said she had 5,000 troopers ready and would deploy them in “massive force” to protect people and property.

“Too many people have spent generations building up this city for it to be destroyed by thugs,” said Rawlings-Blake, who has faced criticism that the city had been slow to act.

President Barack Obama was briefed on the rapidly evolving situation by Rawlings-Blake and his newly sworn in Attorney General Loretta Lynch, the White House said. The University of Maryland’s downtown campus, corporate offices and the city’s famous Lexington Market shut down early.

The Baltimore Orioles baseball team cancelled its evening game against the visiting Boston Red Sox as a precaution.

Gray’s grieving family had explicitly asked for no protests. “Today of all days, the family was clear this was a day of sacred closure,” said pastor Jamal Bryant of the city’s Empowerment Temple church, who delivered the eulogy.

Violence had also erupted on Saturday when 34 people were arrested, and six police officers injured, after an orderly rally for Gray outside Baltimore city hall. Police on Monday announced they had received a “credible threat” that criminal gangs in Baltimore had “entered into a partnership to ‘take out’ law enforcement officers.”

At the funeral, Gray’s body was in a white casket next to a Los Angeles Dodgers baseball cap and a sign reading “Peace y’all.”

Crowds swayed to hymns, chanting “justice shall prevail, peace will prevail” in the church, where a photo of Gray was displayed among floral wreaths.

Supporters, many dressed in white, filled the building’s 2,200 seats and hundreds of others stood, with the words “Black lives matter and all lives matter” projected on the wall.

Tensions have been on the rise in Baltimore since Gray’s death, which his family’s lawyers say was caused when his spine was mostly severed following his arrest. Six officers have been suspended with pay pending the outcome of a police investigation that is to be submitted to state prosecutors by Friday.

The U.S. Justice Department, which was already looking into Baltimore’s use of force, has also opened a federal civil rights probe.

Police confirmed Gray had requested medical help and an inhaler after he was detained and have acknowledged that he should have received medical attention sooner.

In video taken by bystanders, Gray can be heard howling in apparent pain as his limp body is dragged into the van during his arrest.