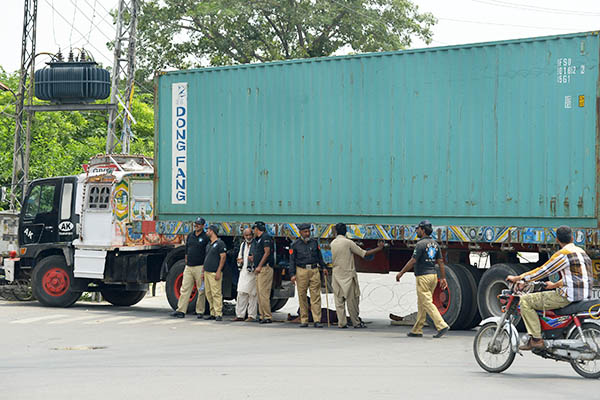 Followers of Tahir-ul-Qadri, the firebrand cleric who has threatened to march on Islamabad and overthrow the government, clashed with police on Friday after authorities blocked all roads leading to his headquarters in Lahore.

The clashes erupted after hundreds of baton wielding Qadri supporters tried to remove shipping containers used to block the roads to his base in the Model Town area. Police fired tear gas and baton charged the crowd after one of the containers was forcibly removed. The protesters also pelted stones at the police, injuring at least three officials, according to Rana Mashood, law minister for Punjab province.

The law minister told a press conference Qadri’s “final destination” would be a jail cell, specifically citing his incitement of his followers to attack police officials. He also said that the government had launched a crackdown on Pakistan Awami Tehreek (PAT) “terrorists” across Punjab province.

Also on Friday, PAT activists set fire to a police station in Khushab and injured several policemen. Meanwhile, a PAT activist died on Saturday morning after sustaining injuries in clashes with police in Bhakkar on Friday night.

Qadri on Thursday threatened to march on Islamabad and overthrow the government of Prime Minister Nawaz Sharif. A statement released by the PAT quoted him as saying the group would have “no choice other than giving a final call of revolution to the entire nation to come out on streets and march toward Islamabad and provincial capitals to topple [the] government,” should the arrests of his followers continue. He alleged that over 500 PAT workers had been arrested by police as part of a campaign of intimidation.

On Saturday, PAT workers took over 20 policemen hostage in various cities of Punjab, including Lahore and Jehlum, and demanded that their colleagues be freed in exchange for the officials. They warned that more policemen could be taken hostage if they were “provoked.”

Qadri, who is normally Canada-based, returned to Pakistan in June to lead what he terms a “peaceful revolution.” Clashes between Qadri supporters and police in June left 14 activists dead in a rare example of political violence in the relatively peaceful Punjab province.

The cleric had previously announced a mass prayer session for the victims of June’s violence to be held on Aug. 10 in Lahore but it is unclear whether he plans to march on the capital the same day.

A religious moderate, Qadri commands tens of thousands of followers and held a disruptive four-day sit-in protest against the government in 2013, months ahead of the election that saw Sharif come to power for the third time.

Tahir ul qadir is not real representintive of his party , he is not in favour of his followers , as many of his followers lost their life during protest , and now this story is repeating in lahore ,is this democracy that government is trying to stop the activities of politicians. Qadri is trying to become charismatic leader , but in vain he is only religious “mulla ” . pakistan awami tehreek is becoming pressure group which is not good sign for our politics , we should think about it that how can we work for the betterment for our country . we dont need protests , we dont need agitation , we dont need extremism , we need moderate , new , eduacated , healthy and democratic Pakistan .