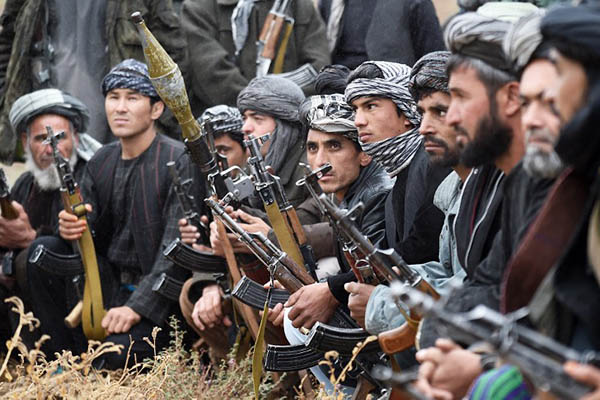 Riding on horseback and motorbikes, commander Naeem’s fighters combed a fog-enveloped Taliban infiltration route in Afghanistan’s northern badlands, as the government expands anti-insurgent militias across a patchwork of fiefdoms.

Desperate to muzzle the resurgent Taliban, the government is cultivating thousands of militias with checkered pasts as a short-term security fix to supplement ground troops suffering record casualties. But the rise of these groups, a throwback to the devastating civil war in the 1990s that set the stage for a Taliban takeover, risk aggravating factionalism and pushing Afghanistan deeper into what observers call a self-perpetuating conflict.

For Naeem, a militia commander with a short, thickset frame who leads around 200 fighters in the volatile Pashtun Kot district in Faryab province bordering Turkmenistan, they are key for survival. In a scene that could have been lifted from history books, his horse-mounted warriors with back-slung guns and RPG warheads scoured a mountain pass near the village of Jamshedi for Taliban intruders blamed for a spate of fatal ambushes.

“Without uprising forces,” said Naeem, who is strongly averse to the label militias because of their contentious history, “the Taliban will overrun the district within minutes, killing their way into villages.”

“Without us, Faryab will become another Kunduz,” he said, referring to the northern city that the Taliban briefly captured in September in their most spectacular victory in 14 years.

There are around 5,000 men serving in Faryab’s irregular or semi-regular armed groups—and Afghan politicians are pushing for thousands more across the region as the stubborn insurgency expands, a Western official told AFP. “The price of an AK47 has roughly doubled in the capital Maimana’s bazaar over the last two years as militias have re-mobilized in Faryab,” the official said, requesting anonymity.

President Ashraf Ghani’s government also plans to scale up the Afghan Local Police (ALP)—U.S.-backed village defense forces likened to militias—to 45,000 from a nationwide force of around 30,000, he said. The proliferation of militias, a potential powder keg in the already strife-torn nation, represents a complete departure from previous government efforts to disarm these groups and is at odds with Ghani’s recent pledges to rein them in.

“The rapid growth of armed groups is alarming as these groups have a terrible history of abusing human rights and refusing to obey their purported masters in the government,” the official said.

With inadequate training, a lack of government oversight and a pervasive culture of corruption and impunity, some militias have morphed into brutal criminal gangs. One ALP unit in Faryab was accused of using a dry well filled with snakes as a torture chamber, according to a recent International Crisis Group report. Another used a captive in an open field for target practice.

Their terrifying tactics including theft, rape and drug trafficking have turned some villages into ghost towns while driving residents in other areas to join the insurgency for self-protection. “Militias in some areas are bedeviled by internal rivalries, revenge attacks and intra-group clashes,” said Obaid Ali, a researcher with the think-tank Afghanistan Analysts Network. “Their end goal is ensuring their own financial survival through smuggling and extortion.”

The rise of militias also lays bare the shortcomings of the multi-billion dollar U.S.-led effort to develop self-reliant Afghan forces, who are suffering large daily casualties and struggling to beat back the multi-front insurgency. Government forces have been unable to stem the alarming Taliban advance in Faryab, a once-tranquil landscape of honey-colored mountains and orchard-covered knolls, where insurgents recently came close to overrunning the capital city and besieged key districts.

On the night of Oct. 4 when the Taliban sought to capture Maimana, Naeem says he fielded phone calls from panic-stricken security officials fleeing the city and asking him for refuge in his village. “‘I will beat you on your head if you release your grip on Maimana,’ I told them,” Naeem recalled. “If security forces were capable of beating the Taliban on their own, shopkeepers and farmers would not need to stand up to fight, people would not have to sell their jewelry, cows and buffaloes to buy new weapons.”

Naeem’s force is an unusual group of 12 ALP fighters, including himself, on the government payroll and dozens of other irregular militiamen—mostly unpaid villagers eager to be integrated into the ranks of salaried forces. “The Taliban forcibly collect usher from farmers. We don’t even demand a piece of bread from anyone,” he said. “We are protectors of our motherland, not predators.”

Among Naeem’s men is 24-year-old Shah Mohammed Raheemi—a university student of economics by day, militiaman by night. Three years ago, troubled by the killing of three close friends in a daytime Taliban ambush, he traded an entire season’s harvest of sesame seeds from his terraced farm for a Kalashnikov. “We face a stark choice,” said Raheemi. “Either go with the militias or fall prey to the Taliban.”