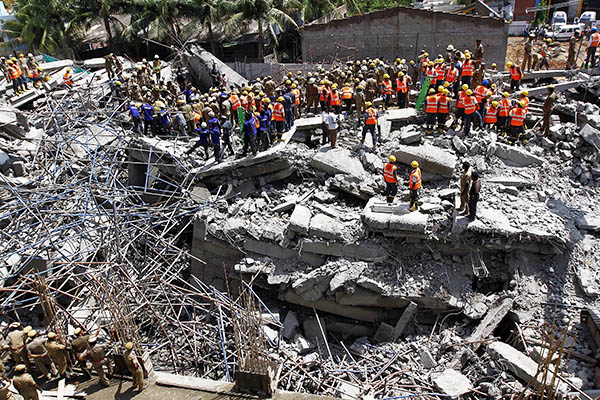 At least 17 people are dead in the construction disaster, with an undetermined number of people still trapped in wreckage.

The confirmed death toll from India’s latest building collapse rose to 17 on Monday as authorities blamed shoddy construction for the tragedy near Chennai.

As rescuers extended their search through the rubble of the 11-storey complex into a third day, officials said the death toll had risen by six from their last update. “Total of 38 [bodies] have been retrieved so far, 21 of them alive and 17 dead,” S. P. Selvan, a senior officer from the National Disaster Response Force, told reporters from the accident site in Tamil Nadu state on Monday.

An undetermined number of people were still trapped in the wreckage.

Rescuers faced a huge challenge trying to remove the rubble of what had been a partially-built residential complex and the operation could take several more days, added Selvan. Police have detained at least five people for questioning, including the builder and engineers involved with construction, according to local newspaper reports.

Speaking on a visit to the scene of the disaster on Sunday night, Tamil Nadu Chief Minister Jayalalithaa Jayaram said the collapse appeared to have been the result of poor construction. “From investigations conducted by our senior officers, it appears that the building plans that were approved were not strictly adhered to by the builders,” she told reporters. “There was nothing wrong with the plans that were submitted for approval but the builders … did not adhere to the plans that have been approved.”

The collapse in Tamil Nadu on Saturday came only hours after a dilapidated apartment block crumbled in New Delhi, killing 10 people, including five children.