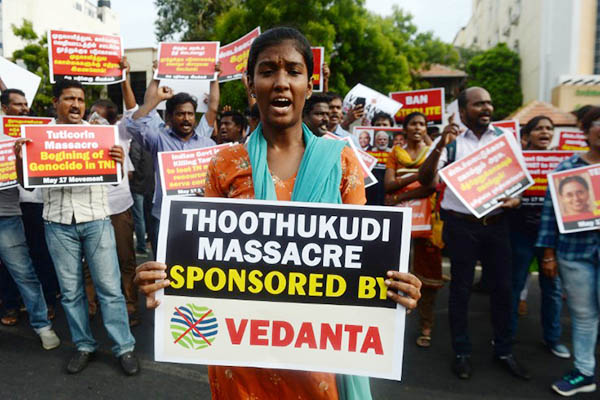 A protester shot during demonstrations against a copper plant in southern India died of his injuries on Thursday, officials said, the 13th victim killed by police fire.

A curfew remained in pockets of Tuticorin city in Tamil Nadu state where police used live ammunition to disperse protesters this week, provoking international outrage and demands for an immediate investigation.

Calls demanding the closure of the copper smelting plant owned by British mining giant Vedanta Resources had been building in recent months, with residents complaining it was polluting their city. The resistance came to a head on Tuesday when police stopped a crowd of thousands from protesting outside the factory.

Cars and buildings were set ablaze and rocks hurled at police, who responded with live fire. Eleven demonstrators were shot dead and many people injured in the melee, including 20 police. Another protester died on Wednesday when he was struck by rubber bullets in a second day of protests.

The latest victim died in hospital on Thursday, two days after being injured, doctors said. “He was brought in a critical condition with bullet injuries and died today,” a doctor at the local hospital told AFP.

The chief minister of Tamil Nadu has ordered an inquiry but defended the actions of police, which the state’s opposition leader called “mass murder.”

“The police have a duty during protests to maintain law and order, but lethal force can only be used if there is an imminent threat to life,” Meenakshi Ganguly, South Asia director at Human Rights Watch, said. “Tamil Nadu authorities need to carry out a prompt and credible investigation to determine if police used excessive force.”

Internet services have been blocked across the city for five days. Police justified the blackout to stop the spread of information that could incite further violence as they search for those behind Tuesday’s arson attacks.

Environmentalists and locals say the factory contaminates water and air, claims its owners deny. The company has sought to renew the license of the temporarily non-operational plant and hopes to double its production capacity.

But a state court on Wednesday ordered that it cease any further construction at the new site. The ruling came just hours after Tamil Nadu’s pollution board ordered the existing plant be shut and its power supply cut until a verdict is made on its licensing application.

Indian-born billionaire and Vedanta Resources chairman Anil Agarwal said he was “very sad” to hear of the incident at his plant. “This was absolutely unfortunate,” he said in a video posted to Twitter. “Once again I assure you, I am fully committed to the environment and the development of people of Tuticorin and Tamil Nadu. We will abide by the law of the land.”

Another 2,843 Coronavirus Cases Reported in 24 Hours