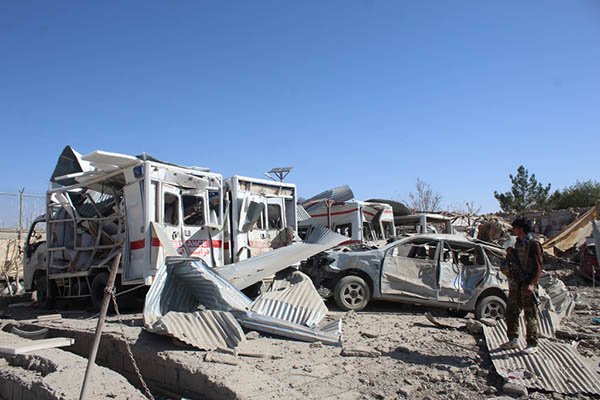 Casualties in Taliban bombing that flattened hospital hit 39, with 140 others wounded

The death toll from a massive Taliban bomb attack, which flattened a hospital in southern Afghanistan earlier this week has risen to at least 39, officials said on Friday.

The jump in the toll from the blast, which took place in the town of Qalat in Zabul province on Thursday, takes the total number of people killed in just three days of violence across the war-torn country this week to at least 91.

“The toll from the hospital attack in Qalat has jumped to 39 killed, 140 others wounded,” said Gul Islam Seyal, the spokesman for the provincial governor.

Earlier, authorities had said the blast had killed 20 people. Another official put the toll even higher on Friday, at 41.

The surge in violence, with civilians paying the heaviest price, has come after U.S. President Donald Trump called off talks with the Taliban that could have seen Washington begin withdrawing troops, and as the country gears up for a presidential election. The insurgents responded to Trump’s declaration that the talks were “dead” earlier this month by promising to continue fighting, and have vowed to target the Sept. 28 polls.

But they also left the door open for talks to resume. The White House has said the talks will not continue if the violence does, but the Taliban have argued that the U.S. is also killing people in Afghanistan.

Thursday’s bloodshed began with the Qalat bomb near dawn. Hours later, reports emerged of an air strike in eastern Nangarhar province said to have killed at least nine civilians.

“U.S. forces conducted a precision strike against Da’esh terrorists in Nangarhar early [on Sept. 19],” Col. Sonny Leggett, spokesman for U.S. Forces-Afghanistan, said in a statement on Friday, using the Arabic acronym for the Islamic State militant group. “We are aware of allegations of the death of non-combatants and are working with local officials to determine the facts to ensure this is not a ploy to deflect attention from the civilians murdered by the Taliban at a hospital in Zabul earlier.”

The strike came just hours after four people were killed on Wednesday when unknown gunmen and a suicide bomber stormed a government building in nearby Jalalabad, capital of Nangarhar.

On Tuesday, the Taliban killed nearly 50 people in two separate attacks—one at a campaign rally for President Ashraf Ghani in the central province of Parwan, and the other in Kabul. Ordinary Afghans continue to bear the brunt of the conflict, with more civilians killed in 2018 than during any other year on record, according to the United Nations.