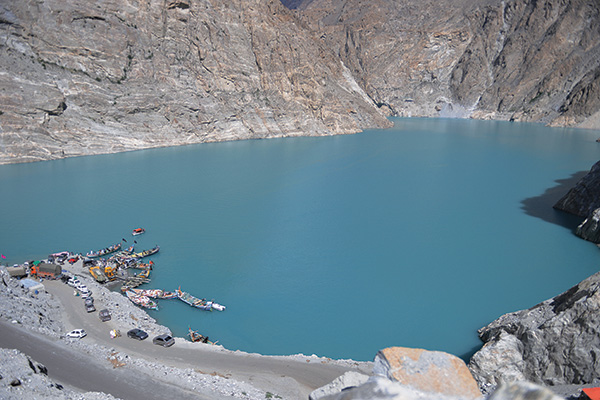 It is evening on an early summer day. The light of the sun, rapidly disappearing behind the Hindu Kush mountain range, has given way to twilight. Local men, primarily small businessmen who operate shops and stalls, have yet to return to their homes. The scents of various cuisines intermingle with the pristine mountain air as the smoke from kitchens across the tiny settlement wafts upwards. A few local women fetch water from a nearby tributary of the Indus River, transporting it in jerrycans as young girls in colorful attire play boisterous games of hopscotch outside their homes, punctuating the stillness of the evening with their exclamations of glee.

This small settlement, comprising around two-dozen houses, has no formal name. At least, not yet. But for many locals it has come to be known as Sehra, or blessing, for the relief it brought them after they were forced to relocate here when their village was nearly destroyed in a flash flood eight years ago as Pakistan suffered devastating floods that directly affected around 20 million people. With a nationwide death toll of almost 2,000, the natural disaster provoked calls for better flood preparedness and disaster management, but ignored in the immediacy of the tragedy was a harbinger of worse to come: refugees, forced to flee their homes due to shifting river flows caused by climate change, who survived but no longer had any homes to return to.

“It was a sudden flood. It washed away 28 houses, a bridge, standing crops and several cattlehead completely,” says Sher Afzal, 38, father-of-six and permanent resident of the settlement, recalling the events of 2010 that left their village of Jaglot Bala practically a ghost town. “It also severely damaged several other houses and agricultural land.”

A thriving community of around 250 households, Jaglot Bala boasted rich, agricultural fields owned by local residents, many of them livestock herders. That evening in 2010, it was struck by a flash flood carrying debris, rocks and stones. Fortunately, cow herders from the village had been tending to their livestock near a newly formed glacial lake. They saw, first-hand, that the lake had burst and started overflowing. As per tradition, they built a huge bonfire atop the mountain to inform anyone downstream to be wary of the impending disaster.

Afzal says that even prior to the warning, the villagers were prepared for any eventuality. “Just above the village, atop the mountain where large glaciers were located, we found that one of the glaciers had started to melt and formed a lake,” he tells Newsweek. “Day by day, the lake was swelling and there was a chance it could burst at any moment,” he adds, noting that it was a matter of ‘when,’ not ‘if’ floods would strike their homes. “When we saw the fire, almost everyone in the village grabbed their families and ran to higher ground. We had barely gotten clear when the flood hit.”

The warning proved timely. There were no casualties. The village, however, was caught in the midst of the raging waters. Around 30 families lost their homes and livelihoods in the blink of an eye. The floodwaters continued their journey downhill for two straight days, with families forced to live under the open sky as they hoped, in vain, for some relief. “After two days, we came down to this area and started a new life,” says Afzal. “After a few more days, and with the help of locals, we started constructing more permanent houses. Since then, we have lived here. But life isn’t the same,” he says sadly. Prior to the floods, Afzal owned his own farmland and livestock. Since moving to Sehra, he has started operating a small shop in the main bazaar of Jaglot Ghoor, where he sells potato chips and traditional sweets with tea. 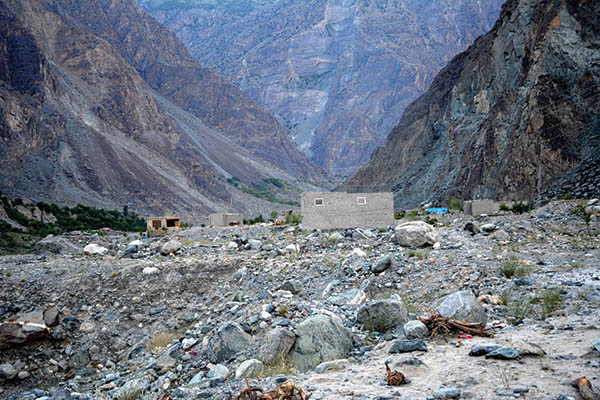 The Sehra settlement was built on barren land by victims of a GLOF that hit Jaglot Bala eight years ago. Amar Guriro

Located around 42km east of Gilgit city at the junction of the Karakoram, Hindu Kush and Himalayas mountain ranges, Jaglot Ghoor is a main stop on the Karakoram Highway. The new settlement built by the refugees of Jaglot Bala has spread on either side of the highway that connects Pakistan to neighboring China. There is no formal planning or reason on display in the construction; many of the houses don’t even have boundary walls. The days when they used to tend to their own fields are long since past.

“We don’t even have access to water here, despite the settlement’s location on the bank of the River Indus,” says teenager Reyan Abbasi, a local student who was a child when the 2010 floods hit his village and still remembers it vividly. “Unfortunately, the new settlement is located high [beyond the range of floodwaters] and the river flows down so we have to travel to a nearby stream to get any water.” This is a far cry from life in their native village. In Jaglot Bala, they grew wheat and vegetables on their own land, had orchards of fruits, and cut their own firewood from a nearby forest. The livestock maintained by a majority of families also provided easy access to milk and meat. Not so in Sehra.

The new settlement has no room for agriculture, and maintaining livestock is unsustainable due to a dearth of open pastures. Residents forced to leave Jaglot Bala say they have had to adapt to their new living arrangements, abandoning ancestral professions of farming and shepherding just to survive and provide for their families. Due to its informal nature, the settlement also lacks basic facilities; there is no water supply, no healthcare facilities and no schools. Children have to walk long distances to nearby villages just to secure an education, forcing many parents to stop enrolling them to avoid the hassle. “Carrying a heavy schoolbag and walking [long distances] is difficult. So, I quit school and spend my days at home, helping my mother cook and take care of my siblings,” says teenager Uzma. But even as the former residents of Jaglot Bala forge ahead, others aren’t so lucky. With rising temperatures globally expected to increase the rate of glacial melts, their plight is one Pakistan’s government cannot long afford to ignore.

Glacial Lake Outburst Floods (GLOFs) are not a new phenomenon, especially for the mountainous regions of Pakistan. In Gilgit-Baltistan, where many villages and settlements exist along the banks of rapidly flowing rivers and streams, such floods have always been deemed an acceptable risk, a cost of survival. However, what was once a rare occurrence has ramped up in recent years. According to the United Nations Development Program (UNDP), the past 10 years have been especially harrowing, as the incidence of climate-change induced disasters has massively increased and resulted in severe flooding. The biggest culprit: rapid melting and overflowing of glacial lakes that release millions of cubic meters of water from the tops of mountains, gathering debris and speed as they flow downstream, bringing with them destruction, and loss of life and infrastructure.

According to Syed Zahid Hussain, former project manager of an UNDP-supported GLOF awareness campaign in the Gilgit-Baltistan region, the area has witnessed over 30 GLOF events in different valleys since 2010. “Because of rapid melting of glaciers as a result of global warming, over 3,000 glacial lakes have developed in Gilgit-Baltistan and in Khyber Pakhtunkhwa, of which around 36 glacial lakes have been assessed to be on the verge of outburst and may bring hazardous GLOF,” he told Newsweek, adding that the increasing temperatures were melting frozen water resources at an unprecedented rate, decreasing the ice mass while also increasing the number and extent of glacial lakes in the region.

Quoting research reports on glacier snow and Ice, Hussain said that glaciers in Pakistan are receding faster than in any other part of the world. He warned that if the current rate of melting continued, majority of the major glaciers in the region would disappear by 2035.

The government is aware of the looming threat. Mitigation of GLOFs was included in the National Climate Change Policy launched in 2013. The UNDP’s projects, meanwhile, have informed over 1,000 residents—including women—of vulnerable communities about GLOF-related hazards, preparedness and adaptation. In the Bindo Gol and Bagrot valleys, 10 safe havens and access routes have been identified and communicated to local residents to minimize life and material losses from climate change-related disasters. 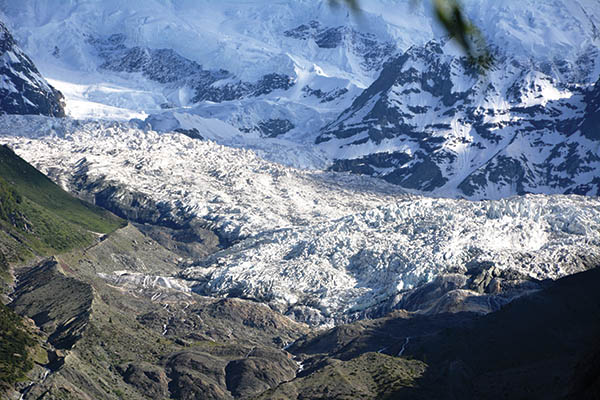 The Pakistan Meteorological Department has also taken notice and issued dire warnings about the threat posed by GLOFs. “GLOF is the number one disaster facing the Gilgit-Baltistan region,” says Dr. Ghulam Rasul, director general of the government body. He said the damage caused by flooding was not restricted to water flows alone. As the snow buried under rocks melts, it rapidly displaces soil, causing landslides and landslips. Earlier this year, in July, Ishkoman Valley in the Ghizer district located near the Pakistan-Afghanistan border in Gilgit-Baltistan was inundated. A large quantity of ice fell into the Immit River, blocking outflows and creating a huge artificial lake. As water levels rose, the river overflowed, destroying dozens of houses and washing away agricultural land, standing crops, dozens of vehicles and cattle.

“The rate at which temperatures are rising in northern areas of Pakistan is much higher than any other part of the country,” says Dr. Rasul, citing three decades of data collected by the Meteorological Department from nine automatic weather stations installed at different locations across Gilgit-Baltistan.

Khadim Hussain, assistant director of the Gilgit Environmental Protection Agency, says that in addition to global warming, massive deforestation of the region and a rising population had also contributed to the accelerated rate of glacial melting. “Pakistan has an exorbitantly high rate of deforestation, over 2 percent annually. The rate within Gilgit-Baltistan is much higher. Our forests used to shore up our soil and worked as a barrier against climate change. They also worked as carbon sinks,” he says, referring to reservoirs that accumulate and store some carbon-containing chemical compounds for an indefinite period. “As the trees are felled, there is more carbon in the air, resulting in the glaciers absorbing more heat and melting even faster,” he added.

People forced to flee their homes due to climate change, such as the residents of Sehra, are known as climate refugees. Little known in Pakistan, this term encompasses millions of the country’s citizens, especially following the flooding disasters of 2010 and 2014. In addition, severe droughts in Thar Desert and the Makran coastal belt of Balochistan, shrinking agriculture spaces, global heatwaves and changes in weather patterns are destroying livelihoods, and creating even more climate refugees annually. The plight of Gilgit-Baltistan, with its focus on glacial lake outburst floods that the UNDP warns could threaten over 7 million people, is but one facet of the larger threat facing Pakistan.

As part of its efforts, UNDP recently initiated a $37.5 million “Scaling-up of Glacial Lake Outburst Flood Risk Reduction” project in northern Pakistan. Estimated to end in 2022, the project aims to build 250 engineering structures, including spillways, dams, ponds and drainage, in addition to planting trees, to reduce the risk of GLOFs. The incoming government of Pakistan Tehreek-e-Insaf, which won the July 25 general elections, has also pledged to work toward overcoming climate change, promising to plant billions of new trees and improve risk reduction measures. With scientists increasingly warning that the Earth is poised to become a ‘hothouse planet’ if threshold temperatures are not brought to heel, this is welcome news not just for Pakistan, but the entire planet as a whole.

It may already be too late for the people of Jaglot Bala. But for the millions living in at-risk villages and towns across Pakistan’s north, a reckoning is at hand; there are only so many Sehras to go around.

Guriro is a Karachi based multimedia environmental journalist. He tweets @amarguriro