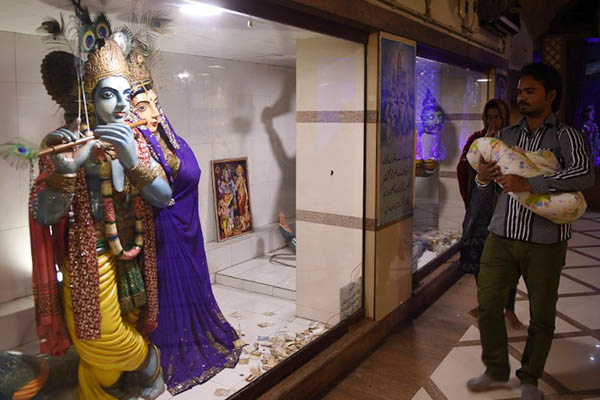 National Assembly Speaker Sardar Ayaz Sadiq, earlier this week, directed the Interior Ministry “to crack down on any individual or group involved in posting blasphemous material about the Hindu religion.”

Hindu members of the House, who represent the country’s four million Hindus, had complained that pictures of Pakistan Tehreek-e-Insaf Chairman Imran Khan, depicting him as a Hindu deity, were being circulated on social media and that their faith was “being smeared in a wave of hate speech online.” They also pointed to campaigns “desecrating images that were revered by millions of Pakistani Hindus.”

If we want to treat our Hindu community well, we must sort out the textbooks taught to our children in schools. They lionize Muslim invader Mahmud Ghaznavi (971-1030 A.D.)—who destroyed the “idols” of Somnath—without noting the looting he indulged in. Pakistan has also sought to remove publicly displayed statues of non-Muslims inherited from the British Raj. Our clerics make fun of polytheism without any regard for the feelings of Hindus and their pantheon. This they do despite Quranic injunctions that other religions be respected and not denigrated.

In the end, it is the rising extremism across all segments of our society that it to blame for this disrespect—and it is not restricted to non-Muslims. Allama Javed Ghamdi had to leave Pakistan because he, in the June 2000 issue of his journal Ishraq, stated that Prophet Abraham’s destruction of idols and pictures (tamaseel) in the Quran didn’t give us license to insult other religions. Surah Saba (verse 12) refers to the “tamaseel” [idols and paintings] created by Prophet Solomon as acceptable and actually asks the Children of David to be grateful to the Lord for them.

Despite his plea, Speaker Sadiq may yet be surprised by an angry edict from the Council of Islamic Ideology, a group of powerful clerics who may actually order the destruction of all Hindu idols in Pakistan as a part of the country’s ideology. As always, the power and authority of the likes of Khadim Husain Rizvi of the Labbaik movement is palpable, even as that of minorities remains poor and weak.