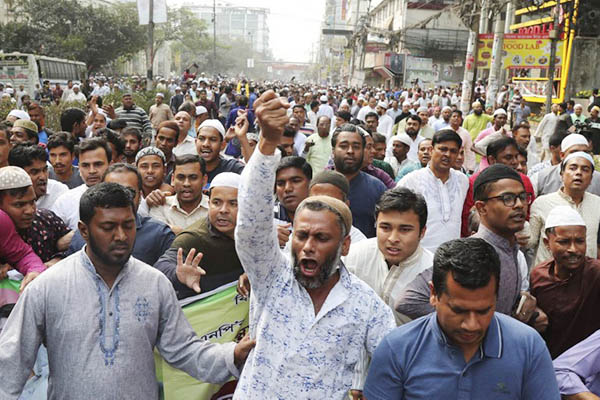 In Bangladesh, a growing rift between ‘Bengali’ and ‘Bangladeshi’ nationalists

The Anti-Corruption Court in Dhaka has sentenced former prime minister and chief of the opposition Bangladesh Nationalist Party (BNP) Khaleda Zia to five years imprisonment for misappropriating $252,000, or 21 million taka, in foreign donations meant for the Zia Orphanage Trust. When she was in power she had set up the Trust just before the donations started flowing in. Her son Tarique Rehman is already in exile, accused of colossal corruption during his mother’s rule.

Bangladesh is neatly “bipolar” between Zia’s BNP and the Awami League of current prime minister Sheikh Hasina Wajed. The first is rightwing and pro-Pakistan and the second is “socialist-secular” and pro-India, both alternating in power as their governments run out of steam after polls. Wajed has the advantage of being the daughter of the founder of Bangladesh, Sheikh Mujibur Rehman. Both parties are unfortunately dynastic: Khaleda Zia is the daughter of President Ziaur Rehman, a general who ruled Bangladesh after Mujibur Rehman was killed by the Bangladesh army.

The state of Bangladesh boasts high culture and education but sways between those who favor “Bengali” nationalism, which is language-based and pro-India, and those who propagate “Bangladeshi” nationalism which inclines to religion and therefore pro-Pakistan. The revival of the Islamist worldview on the Bangladeshi street favors Khaleda Zia who sides with Jamaat-e-Islami and other fundamentalists that in turn link up with Jamaat-e-Islami and state of Pakistan.

Both parties are unfortunately inclined to misappropriation of funds. Although economically better off than Pakistan, Bangladesh is subject to religious violence against intellectuals and bloggers accused of blasphemy. Governance has become problematic in South Asia with the rise of religious extremism in recent times. The constitutions of Bangladesh and India ordain secular governance but the states are drifting toward religious extremism. The BNP will now go into the agitational mode—so familiar in Pakistan—and make no doubt governance difficult in the country.