Home Elections 2013 Ahead of Polls, ‘Rivers of Blood and Fire’ for Pakistan’s Left

Ahead of Polls, ‘Rivers of Blood and Fire’ for Pakistan’s Left 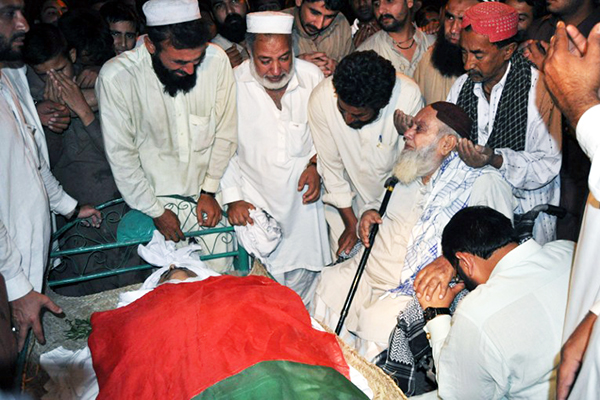 The country’s left-of-center parties have more than just the jihadists standing between them and electoral victory.

Terrorists have been given license to target and kill Muttahida Qaumi Movement workers, one of the party’s top leaders said on Thursday, after two of its men were gunned down in separate incidents in Sindh province.

“We have been crossing rivers of blood and fire,” said Dr. Farooq Sattar. “Our courage and determination have not diminished.”

But there’s more blood and fire in store for the MQM, one of three parties under specific threat from the Pakistani Taliban. The militants accuse the party and its former coalition partners, President Asif Ali Zardari’s Pakistan Peoples Party and the Awami National Party, of committing “genocide on our tribal people and Muslims.” The Taliban have dismissed democracy as a “system of infidels,” and declared war on these three “secular” parties. (At the same time, the Taliban have vouched for the political integrity of opposition figures Nawaz Sharif and Imran Khan.)

Yesterday in Hyderabad, Sindh’s second largest city, the Taliban shot and killed Fakhrul Islam, a 46-year-old Pakhtun shopkeeper who was running for the national and provincial assemblies. “We carried out this attack,” a Taliban spokesman told reporters. “We shot dead Islam.”

The attack on Islam was precise and rapid. The drive-by killing took place outside his shop in Halah market. Four bullets hit him in the head and abdomen. Islam, an MQM candidate, was buried on Friday in Hyderabad’s Pathan Colony. He is survived by his widow and three children.

The three political parties marked by the Taliban and united previously as precarious partners in government have to be watchful of each other well.

Within hours of Islam’s assassination, another party apparatchik was mowed down in Karachi by two armed gunmen on a motorcycle. The MQM says Syed Shiraz Asghar, a member of its “literature committee,” was killed by “terrorists of the city’s gang war”—an allusion to the continuing bloody turf wars among the ethnically distinct and heavily-armed MQM, ANP, and PPP. (Three city wardens were also killed in Karachi’s Soldier Bazaar the same day in an apparently unrelated incident.)

The Army and law enforcement agencies are conducting operations across the country to ensure peace on Election Day, May 11. It is engaged in a high-stakes battle in Tirah valley in the tribal northwest, and agencies have arrested in south Punjab and in Karachi scores of jihadists and troublemakers, including alleged MQM militiamen.

Sattar has voiced strong objections to the sweeps across Karachi, Pakistan’s financial capital and the seat of his party’s power. “The political and electoral freedom of the MQM is being usurped by state repression,” he said. Sattar blames his city’s woes on the influx of hundreds of thousands of Pakhtuns who settled in the port city to escape military operations against Al Qaeda and the Taliban in the northwest. He said his party’s offices are being raided and workers being arrested arbitrarily, from their homes, without cause or due process. “This is imposing a pall of fear,” he said. “This is pre-poll rigging against the MQM.”

Adding to the MQM’s challenges is the Supreme Court demand that Karachi’s constituencies be redrawn. Given the lack of an updated census, the Election Commission of Pakistan weighed in against this but soon backed down because Chief Justice Iftikhar Chaudhry remains adamant. The MQM—which is accused of attacking and killing Chaudhry’s supporters on May 12, 2007, in Karachi—will be electorally disadvantaged from the delimitations and has filed suits challenging the order.

Less than a month to go before Pakistan hits the polls, there is little fanfare attending the campaigns of candidates from MQM, ANP, and the PPP. Like the MQM, the other two parties have also suffered casualties from terrorism this election season. The latest killings certainly won’t help. Zardari has been prohibited by the courts from making campaign appearances and his son, Bilawal Bhutto Zardari, the party’s chairman, has been bunkered in Karachi. The 24-year-old PPP chief is expected to address election rallies, which will be at risk of Taliban attacks and thin attendance in any case, via video link or phone.

Mustafa Kamal, former mayor of Karachi and one of the MQM’s nationally-known figures, fears elections in the country’s largest city will neither be free nor fair. “There is an international conspiracy,” he alleged on Thursday, “to bleed Pakistan by a thousand cuts.”