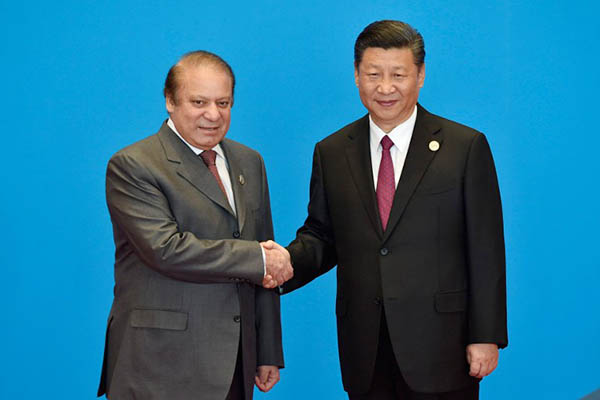 Prime Minister Nawaz Sharif sent the right message during his address at Beijing’s One Belt, One Road Summit

Addressing 1,500 guests representing over two-dozen states, Prime Minister Nawaz Sharif marked his speech at the One Belt, One Road (OBOR) summit at the China National Convention Center in Beijing on Sunday with a peace offering to India. “The China-Pakistan Economic Corridor has no geographical boundaries; it must not be politicized. In implementing this corridor, we are not striving to merely leverage geography for economic prosperity; we are also trying to build a peaceful, connected and caring neighborhood. It is time we transcended our differences, resolved conflicts through dialogue and diplomacy, and left a legacy of peace for future generations,” he said, reaffirming Beijing’s invitation to New Delhi to join the trade initiative. Although this has been said many times in the signed documents of the South Asian Association of Regional Cooperation (SAARC), many in Pakistan would have noted that he was “sticking to his line.”

China has gone on record as designating Pakistan as the linchpin of OBOR in the form of CPEC. Beijing has signed onto projects worth $14.5 billion out of the trillions it plans to spend on the Silk Road joining three continents, its “belt” of railways stretching from China to London, and a maritime “road” made up of ports in Southeast and South Asia all the way to Greece. In Pakistan, the new money will lease thousands of acres of agricultural land to Chinese enterprises to set up “demonstration projects,” ranging from seed varieties to irrigation technology. Monitoring and surveillance will be enhanced in cities from Peshawar to Karachi, complete with day-and-night video recording for improved law and order.

A day earlier, members of the Baloch Liberation Army symbolically killed 10 construction workers in Gwadar. The BLA—and also Islamic State—had earlier claimed a suicide attack on scores of people in Mastung. “This conspiratorial plan [CPEC] is not acceptable to the Baloch people under any circumstances,” a spokesman told local journalists. Pakistan’s defense minister had attributed the attacks to India but the real message was Pakistan’s own internal fissures.

The message of CPEC, meanwhile, is the “right message” but Pakistan’s struggles to overcome its past continue to haunt Islamabad. The U.S. Treasury recently declared Maulana Ali Muhammad Abu Tarab a global terrorist. Tarab is another in a long line of Saudi-supported religious scholars designated a terrorist; only he was also an erstwhile member of Pakistan’s Council of Islamic Ideology.