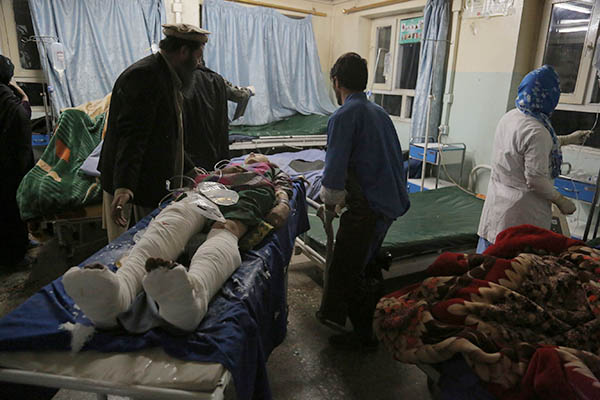 No one has yet claimed responsibility for the blast in Andar district of Ghazni province.

A roadside bomb on Sunday killed at least 18 civilians, mostly women, as they travelled by minibus to a wedding party in a volatile area of central Afghanistan, officials said.

The interior ministry said the blast occurred in Andar district of Ghazni province, where Taliban insurgents have a strong presence. “The bomb hit a minibus civilian vehicle today at 4:30 p.m. that was heading to attend a wedding party,” a statement from the ministry said. “In the attack, 14 women, three men and a child were martyred and five others were wounded … the ministry strongly condemns this brutal attack of the enemies of Afghanistan.”

“Enemies of Afghanistan” is phrase used by Afghan officials to refer to the Taliban militia and other armed groups fighting against the U.S.-backed Kabul government.

Mosa Khan Akbarzada, Ghazni provincial governor, confirmed the death toll, describing the attack as a “tragic incident.” He said no other details were immediately available from the area.

Roadside bombs are often planted by Taliban militants to target Afghan security forces and U.S.-led NATO troops, but they often miss their intended targets and kill civilians. There was no immediate comment from the Taliban, which normally denies involvement in attacks that cause civilian casualties.

Sunday’s attack came as the Afghan government seeks a negotiated settlement ending the 12-year war, though any peace deal appears far off.

A presidential election is scheduled in April and the last of the 87,000 NATO combat troops deployed in Afghanistan will leave by December 2014, triggering fears that the country could face spiraling turmoil.

The Afghan military has been built from scratch since 2001 to thwart the Taliban, but it has struggled with high casualty rates, “insider attack” killings, mass desertions and equipment shortages.

On Saturday, an Afghan soldier shot and injured two NATO troops before being killed in a dispute at a flagship officer-training academy near Kabul that only opened a week ago.

As Afghan security forces take charge of security countrywide, violence has been on the increase. More than 1,000 civilians were killed and around 2,000 others were injured in the first half of 2013, according to a U.N. report, a 23 percent increase from the same period last year.

In a bid to help foster peace efforts, President Hamid Karzai will meet with Pakistan Prime Minister Nawaz Sharif in London this week. Pakistan was a key backer of the hardline 1996-2001 Taliban regime in Kabul and is considered essential to mediation efforts with the militants.