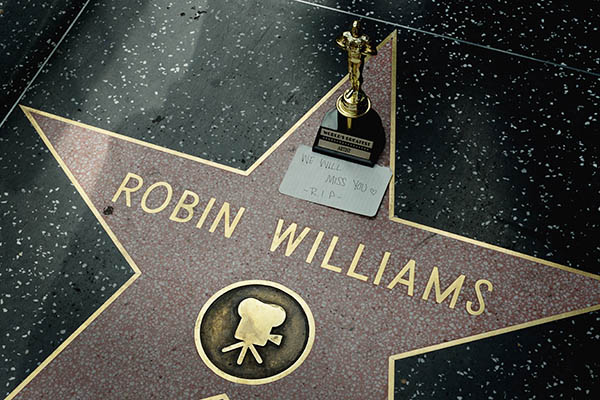 Oscar-winning actor and comedian found dead of suspected suicide at his home in Los Angeles.

Oscar-winning actor and comedian Robin Williams died from a suspected suicide on Monday after a battle with depression, triggering an outpouring of anguished tributes to one of the most beloved entertainers of his generation.

The 63-year-old star of revered movies such as Good Will Hunting, Good Morning Vietnam and Mrs. Doubtfire was found dead at his home in Tiburon, northern California, shortly before midday, police said.

President Barack Obama led tributes to an entertainer he described as “one of a kind” while Hollywood titan Steven Spielberg, a close friend, hailed Williams as a “lightning storm of comic genius.”

A statement from Marin County Sheriff’s Department said Williams’ death appeared to be “suicide due to asphyxia.” The veteran actor’s publicist said the funnyman had been suffering from depression prior to his death, and Williams had spoken openly in the past about his battles with alcoholism and drug abuse.

“Robin Williams passed away this morning. He has been battling severe depression of late,” Mara Buxbaum said in a statement. “This is a tragic and sudden loss. The family respectfully asks for their privacy as they grieve during this very difficult time.”

Heartbroken wife Susan Schneider urged the father-of-three’s millions of fans to remember his genius for creating laughter. “This morning, I lost my husband and my best friend, while the world lost one of its most beloved artists and beautiful human beings,” said Schneider, who became the actor’s third wife when the couple married in 2011. “I am utterly heartbroken. On behalf of Robin’s family, we are asking for privacy during our time of profound grief. As he is remembered, it is our hope the focus will not be on Robin’s death, but on the countless moments of joy and laughter he gave to millions.”

After beginning his career as a stand-up comic, Williams rose to fame in the iconic U.S. television sitcom Mork & Mindy, channeling his anarchic, high-energy style as an extra-terrestrial struggling to fit in on Earth. He later reeled off a string of big-screen hits throughout the 1980s and 1990s in roles that often showcased his phenomenal fast-talking, improvisational skills.

Those abilities were showcased in 1987’s Good Morning, Vietnam, where his performance as motor-mouth military disc jockey Adrian Cronauer earned him the first of four career Oscar nominations. But while that role could have been tailored for Williams’ comic skills, he also earned critical plaudits in weightier dramas.

He added more Oscar nominations for his performance as the inspirational English literature teacher John Keating in 1989’s Dead Poets Society and for playing a mentally ill homeless man mourning the loss of his wife in 1991’s The Fisher King. He finally landed a coveted Oscar for 1997’s Good Will Hunting, which earned him a best supporting actor statuette, and helped launch the Hollywood careers of co-stars Matt Damon and Ben Affleck.

News of Williams’ death quickly supplanted the conflict in Iraq as the top item on evening news bulletins as Americans reacted with shock.

Obama, on holiday in Martha’s Vineyard, referenced Williams’ array of beloved performances as he led the tributes to the entertainer. “Robin Williams was an airman, a doctor, a genie, a nanny, a president, a professor, a bangarang Peter Pan, and everything in between. But he was one of a kind,” Obama said in a statement. “He arrived in our lives as an alien—but he ended up touching every element of the human spirit,” he added, referring to Williams’ role as the extraterrestrial visitor Mork. “He made us laugh. He made us cry. He gave his immeasurable talent freely and generously to those who needed it most—from our troops stationed abroad to the marginalized on our own streets.”

“Robin was a lightning storm of comic genius and our laughter was the thunder that sustained him,” said Spielberg. “He was a pal and I can’t believe he’s gone,” added Spielberg, who famously regularly phoned Williams to cheer himself up during filming of his harrowing 1994 Holocaust drama Schindler’s List.

Spielberg’s tribute was echoed throughout an entertainment industry left reeling by news of the comic’s death. “I can’t believe the news about Robin Williams. He gave so much to so many people. I’m heartbroken,” comic and talkshow host Ellen DeGeneres said on Twitter. Fellow comedian Steve Martin added: “I could not be more stunned by the loss of Robin Williams, mensch, great talent, acting partner, genuine soul.” Sarah Michelle Gellar, who starred as his onscreen daughter in his most recent TV work, The Crazy Ones, also shared a collage of photos with the actor on Twitter to commemorate his death.