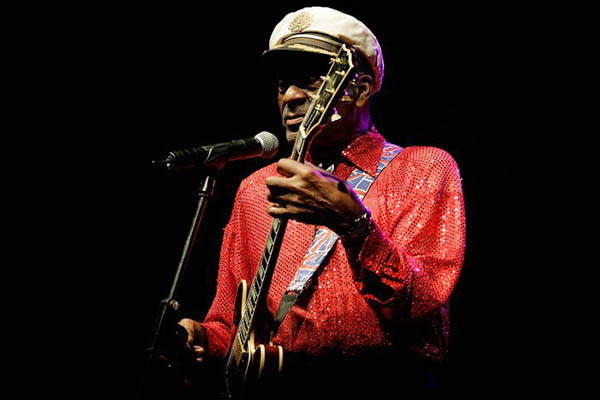 A sensation in the years after WWII, Berry would demur that he had created rock, saying it had always existed in other forms.

Chuck Berry, one of the creators of rock ‘n’ roll who helped shape modern youth culture with his dance-ready rhythms but who struggled to overcome institutional racism, died on Saturday. He was 90.

Police in the St. Louis area, where Berry was born and lived most of his life, said that first responders found the guitar legend unresponsive when they answered an emergency call at his home. “The St. Charles County Police Department sadly confirms the death of Charles Edward Anderson Berry Sr., better known as legendary musician Chuck Berry,” it said on Facebook.

Berry became a sensation in the years after World War II as the baby boom generation came of age in an increasingly prosperous America. The middle-class son of a carpenter and a high school principal, Berry grew up under segregation but instinctively sensed how to bridge the racial divide.

Berry had played blues guitar but found that his white audience was more interested in country. He merged the styles with an electric energy and consummate stage showmanship, although he hesitated to say that he created rock ‘n’ roll. “It used to be called boogie-woogie, it used to be called blues, used to be called rhythm and blues,” he later said. “It’s called rock now.”

Whatever the music was named, Bruce Springsteen, one of many artists heavily influenced by Berry, said the man was indispensable. “Chuck Berry was rock’s greatest practitioner, guitarist and the greatest pure rock ‘n’ roll writer who ever lived,” Springsteen wrote on Twitter.

His 1958 hit “Johnny B. Goode” was so influential and recognizable that the U.S. space program chose it to represent rock music for potential extraterrestrial listeners on the Voyager spacecraft.

“Roll Over Beethoven” from 1956 was almost a manifesto of rock ‘n’ roll as the charismatic Berry urged the DJ to switch off the classical records and turn to the new genre of the youth. Other hits included “Maybellene,” one of the pioneering rock songs that gave a guitar edge to a popular fiddle tune, and “Sweet Little Sixteen,” in which Berry hailed rock ‘n’ roll’s sweep across the United States.

Berry was one of the first African Americans to find a widespread white audience, with his gentle demeanor and the usually innocuous subject matter of his songs initially insulating him in a country where many black people lived under Jim Crow institutionalized racism. But that changed as his fame grew. After a packed performance in 1959 in Meridian Mississippi, a white crowd set upon Berry and forced him to leave through a side entrance after accusing him of kissing a white girl among his fans.

“One of the girls threw her arms around me and hung a soul-searching kiss that I let hang a second too long,” Berry later explained. He was arrested for disturbing the peace and left the city after paying a fine.

His career soon was interrupted when he was arrested in 1959 under an obscure law for taking a 14-year-old girl across state lines for “immoral purposes.” Berry defended himself against allegations that he had slept with the young waitress. But he was convicted by an all-white jury and served a year and a half in prison. In a bitter irony, he was incarcerated just as the United States was swept by white rockers influenced by him, including the British invasion led by The Beatles and The Rolling Stones.

Mick Jagger hailed Berry on Saturday as an inspiration, saying: “He lit up our teenage years, and blew life into our dreams of being musicians and performers.”

After his prison time, friends described the laid-back and fun-loving Berry as a changed man, and the conviction has long been viewed in the African American community as a warning sign for artists on the rise. Berry mostly avoided the media limelight as he resurrected his career. In a rare 1987 interview with NBC television, Berry declined to describe himself as the father of rock ‘n’ roll, listing others including his contemporary Elvis Presley as well as Fats Domino and Little Richard. “We’re all I think just a cog in the wheel. We all got the ball rolling,” he said.

Berry initially found success after record executive Leonard Chess sensed his crossover potential and signed him after an introduction from Muddy Waters. Berry late in his life stayed low-profile in St. Louis where he played two decades worth of shows at the Blueberry Club, with his son Charles Berry Jr. in his backup band. In a surprise, Berry last year celebrated his 90th birthday by announcing that he had recorded his first album in 38 years. Entitled simply Chuck, the album is slated to be released sometime this year.

In a statement as he announced the album, Berry dedicated it to his wife of 68 years, Themetta Berry. “My darlin’, I’m growing old! I’ve worked on this record for a long time. Now I can hang up my shoes!”