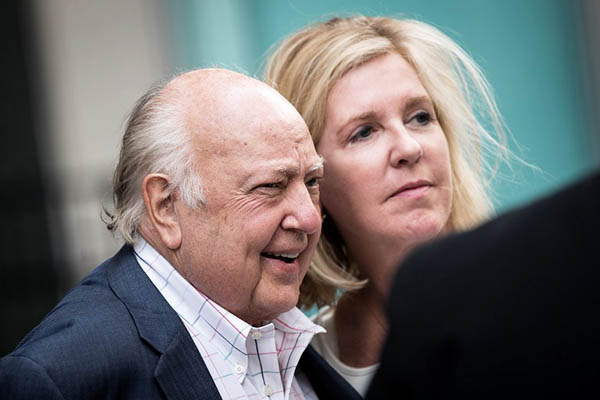 Roger Ailes, who built Fox News into a popular and politically powerful cable network that helped redefine U.S. television news, resigned on Thursday under the cloud of a sexual harassment lawsuit. Rupert Murdoch, head of parent company 21st Century Fox and founder of a media empire that includes Fox News, replaced him.

The company said in a statement that the resignation was effective immediately and that Murdoch, 85, would take over the roles of chairman and acting chief executive of Fox News Channel and Fox Business Network.

The news comes two weeks after Ailes was named in a lawsuit by popular Fox News host Gretchen Carlson, who claimed she was fired for rejecting his sexual advances. The company statement made no mention of the lawsuit or its review of the allegations.

The move represents tremendous turmoil at Fox, built by Ailes and Murdoch two decades ago into the leading cable news channel, drawing praise especially from conservatives and criticism from the political left. With the change, Rupert Murdoch returns to a bigger role a year after handing over more control of operations to his two sons.

“Roger Ailes has made a remarkable contribution to our company and our country,” Murdoch said in the statement. “Roger shared my vision of a great and independent television organization and executed it brilliantly over 20 great years.”

Murdoch said he and Ailes created a network that stands “in stark contrast to the self-serving elitism that characterizes far too much of the media.”

“I am personally committed to ensuring that Fox News remains a distinctive, powerful voice,” he added. “Our nation needs a robust Fox News to resonate from every corner of the country.”

Murdoch, who cut short a vacation on the French Riviera to return to New York, according to the Guardian newspaper, said he was taking the reins at Fox “to ensure continuity of all that is best about Fox News and what it stands for.”

At 21st Century Fox, which also includes a major Hollywood studio and television network, Rupert Murdoch had taken the role of executive chairman with his son Lachlan, and with James Murdoch as CEO. The two sons said in the statement “we join our father in recognizing Roger’s remarkable contributions to our company,” but also hinted about the accusations against him.

“We continue our commitment to maintaining a work environment based on trust and respect,” the brothers said. “We take seriously our responsibility to uphold these traditional, long-standing values of our company.”

A former consultant to Republican presidents, Ailes, 76, had been a key figure in the media empire and a longtime Murdoch ally. Under his leadership, Fox became home to key conservative political commentators, drawing an audience distinct from rivals CNN and MSNBC.

David Greenberg, a Rutgers University political scientist, said in a Politico essay that Ailes essentially created modern conservatism in the United States, having worked with presidents from Richard Nixon to Ronald Reagan to George H.W. Bush. “In fact, apart from the presidents he served, he was arguably the single most important figure in the creation of modern conservatism,” Greenberg wrote. “By fusing television’s power to conjure feelings of anger and resentment to an ideology of cultural populism that demonized liberal elites, Ailes set forth the methods and the message that would help conservative politicians win and maintain power for decades.”

But critics said Ailes and Fox were blatantly partisan. “Despite its ‘Fair and Balanced’ slogan, Fox News under Ailes’ leadership has embraced its role as the communications arm of the Republican Party,” said Eric Hananoki and Ben Dimiero in a column for the watchdog group Media Matters for America. “During the Obama administration, this partisanship accelerated as the network openly campaigned for Republican candidates, launched the Tea Party movement, became a farm system for Republican politicians and served as the stage for Republican presidential primaries, among other egregious ethical issues.”

The sexual harassment suit filed in New Jersey state court said Ailes terminated Carlson, a popular host and former Miss America, as a retaliatory act. Ailes “unlawfully retaliated against Carlson and sabotaged her career because she refused his sexual advances and complained about severe and pervasive sexual harassment,” the lawsuit alleges. Ailes denied the allegations.

After the allegations emerged, some reports said several other women at Fox News had also claimed harassment, including the popular host Megyn Kelly.