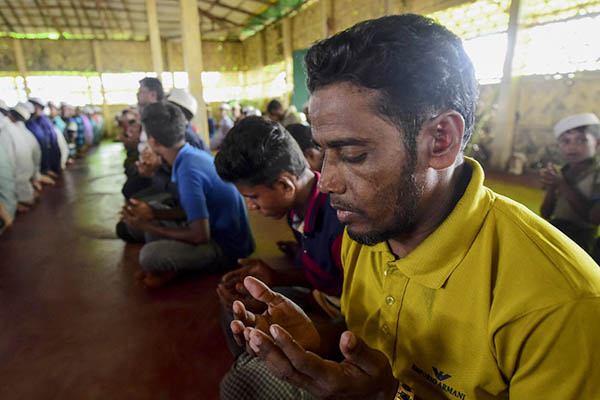 Rohingya imams offered special prayers on Friday for a safe return to their homeland ahead of the second anniversary of hundreds of thousands of the minority fleeing Myanmar to Bangladesh.

Some 740,000 Rohingya from Myanmar’s Rakhine state escaped in August 2017 a military offensive, joining another 200,000 who had fled earlier persecution. Two years later they remain in vast refugee camps in Bangladesh refusing to go home until Myanmar guarantees their safety and gives them citizenship.

The imam at the Khadijatul Kubra mosque in Kutupalong—the largest refugee settlement in the world—prayed to “soften up” the heart of the Myanmar government. “Let us go back home in peace,” Abdul Hakim said.

Most of the displaced mostly Muslim minority left their homes clutching only what they could carry. Bangladesh and Myanmar signed a repatriation deal in 2017 but two attempts to start sending people back, in November and then again this week, failed as the refugees refused to go.

In addition to security and citizenship guarantees, they also demanded that their fellow Rohingya Muslims held in Internally Displaced Personnel (IDP) camps in Myanmar be released. “We prayed to Allah to get justice for what has happened to us. We would like to go back home. But only when our demands are met. I prayed for that today,” refugee Safiul Alam told AFP.

The imam also asked the devotees to join a major rally to be held on Sunday in the camp to mark the second anniversary of their arrival. “We, once again, will peacefully tell the world our demands,” he said.

The Rohingya are not recognized as an official minority by Myanmar, which considers them Bengali interlopers despite many families having lived in the country for generations. U.N. investigators say the 2017 violence warrants the prosecution of top generals for “genocide” and the International Criminal Court has started a preliminary probe.

“Myanmar has yet to address the systematic persecution and violence against the Rohingya,” Human Rights Watch said on Thursday. “So refugees have every reason to fear for their safety if they return.”