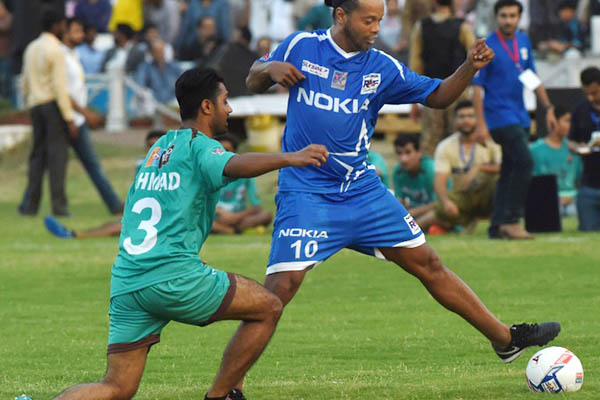 Brazil’s Ronaldinho and a host of other former top footballers played an exhibition match in Pakistan on Saturday in a push to encourage people in the cricket-mad nation to take up the game.

Recently retired Ronaldinho, who graced the Barcelona shirt in his prime, told reporters he wanted to “provide a good show” in the country, which is looking to entice more international stars as security improves. “Thank you for all the admiration and treating me so well,” he said ahead of a match in Karachi, the first of two games in the trip.

Fans thronged to the Karachi stadium for the match late Saturday, with some traveling long distances for the rare chance to watch the footballing greats. “I set off early this morning for Karachi,” Mohammad Yaqoob told AFP. “I am here for the love of football and Ronaldinho.”

Student Bilal Malik, who had come with a group of friends, said the Brazilian player was the star of the match, which also included homegrown players. “His skills are mind-boggling. I want to see him play live before my eyes,” he said.

Pakistan boasted a top place in Asian football until the early 1970s, but a lack of government support and poor infrastructure helped push them to as low as 200th in the FIFA football rankings. The game is growing in popularity once more, however, even in a country obsessed with cricket.

Ronaldinho, 37, who won the Ballon d’Or in 2005 as football’s best player of the year and who was part of the 2002 World Cup winning team, said he is on a goodwill mission aimed at inducing youngsters to play the game. Giggs, who retired in 2014, said he had heard the country had ample footballing talent and was home to a strong Manchester United fan-base.

“I will be happy if I inspire the youth, which is my job,” he said.

Pakistani organizers—Leisure League, a subsidiary of World Group—hope to both promote football, and signal that security has improved in the militancy-plagued country.  Officials want to welcome back international sport, which fled the country after an attack on the Sri Lankan cricket team in 2009.

The Pakistan Army is deploying troops in and around hotels, airports and stadiums over the weekend, officials have said.

Arriving early Saturday by private jet, the players were hosted for lunch by Army chief General Qamar Javed Bajwa, who expressed hope that the visit would be the first of many. “Pakistan is a peace loving country and we love sports,” he said.

The group will play a second exhibition match in Lahore on Sunday.