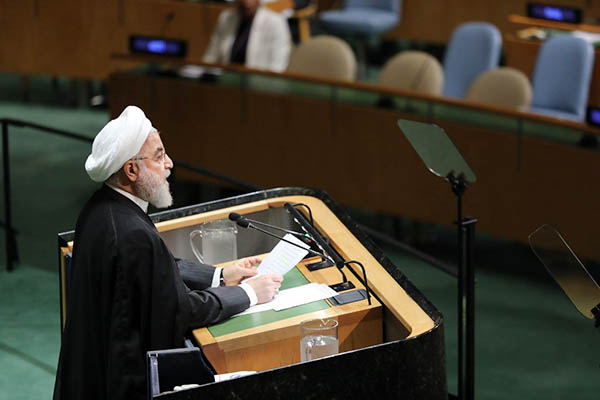 Iranian President Hassan Rouhani on Wednesday demanded that Saudi Arabia end its offensive in Yemen after an attack in the oil-rich kingdom, which Washington blamed on Tehran.

“The security of Saudi Arabia will be guaranteed with the termination of aggression in Yemen, rather than by inviting foreigners,” he told the U.N. General Assembly.

Saudi Arabia is leading an air campaign aimed at defeating Iranian-backed Houthi rebels who control much of Yemen, contributing to a humanitarian crisis in which thousands of civilians have died and millions are on the brink of starvation. The Houthis claimed responsibility for air attacks this month on Saudi Arabia’s oil infrastructure, but U.S. officials blamed Iran and said the rebels did not have the range of sophistication to target the facilities.

Rouhani, mirroring U.S. efforts to rally its Arab allies, invited regional countries to join a “Coalition for Hope” in which he said they would pledge non-aggression and non-interference in one another’s affairs. “The security of the region shall be provided when American troops pull out,” Rouhani said. “In the event of an incident, you and we shall not remain alone. We are neighbors with each other and not with the United States,” he said.

Foreign Minister Mohammad Javad Zarif, elaborating on the idea at a U.N. Security Council session called by Russia, called for a summit among all countries along the Strait of Hormuz, the strategically vital gateway into the Gulf.

The countries will declare their zone free from weapons of mass destruction and form a pact of mutual non-aggression, Zarif said. “The Islamic Republic of Iran stands ready to fully engage in dialogue with the regional countries to discuss all aspects of this initiative,” Zarif said.

Prospects for a broad pact led by Tehran look unlikely as several of the Gulf Arab states have tense relations with Iran.