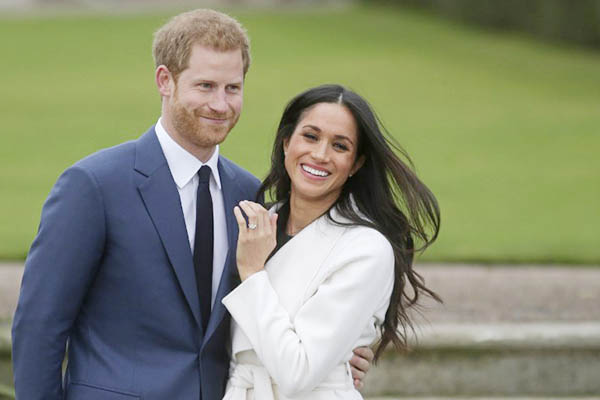 Prince Harry revealed on Monday that he proposed to U.S. actress Meghan Markle over roast chicken, and said she would be “unbelievably good” at her new royal role despite its pressures.

The couple said they were enjoying “a cozy night” at home in his cottage in the grounds of Kensington Palace earlier this month—“trying to roast a chicken”—when he got down on one knee. “She didn’t even let me finish, she said, ‘can I say yes? can I say yes?’ and then there were hugs,” Harry said in the couple’s first interview since the announcement of their engagement earlier Monday.

They revealed they knew little about each other when they were set up on a “blind date” by a mutual friend.

Harry said he had never heard of Markle, while the actress added she was largely ignorant about the British royal family and just asked of their friend, “is he nice?”

The date went so well they immediately met up again before going camping together for five days in Botswana just a few weeks later. “Then we were really by ourselves, which was crucial to me to make sure we had a chance to get to know each other,” Prince Harry said.

They spent the first few months after that staying in, cooking dinner and watching television to avoid any public attention. They said the rest of the royals had been very supportive—and revealed Queen Elizabeth II’s beloved corgis had immediately warmed to Markle, lying on her feet while they had tea.

Harry said he thought his late mother Diana, too, would have been “best friends” with Markle, adding: “They’d be thick as thieves, without question. I think she would be over the moon.”

Harry admitted he was nervous about bringing Markle into the royal family, given the pressures it entails and his mother’s own difficulties in the role. “You can have as many conversations as you want and try and prepare as much as possible but we were totally unprepared for what happened after that,” the prince said of early media interest in their romance.

When the news broke of the relationship, Markle was headline news in Britain—prompting Harry’s office to issue a warning about press “abuse and harassment.”

“It’s not easy for anybody. But at the end of the day she chooses me and I chose her and whatever we have to tackle together or individually, we’ll always be together as a team,” he said.

Markle, who is mixed race, said the focus on her ethnicity was “disheartening,” saying there were “a lot of mistruths” written about her but she refused to read it. Her parents Thomas Markle, of Dutch and Irish extraction, and Doria Ragland, an African-American, said in a statement they were “incredibly happy.”

Harry has previously spoken of his own struggles with his royal role, and his desire to share the responsibility. “All the stars were aligned… This beautiful woman literally tripped and fell into my life, I fell into her life,” he said. “The fact that she’ll be really unbelievably good at the job part of it as well is obviously a huge relief to me, because she’ll be able to deal with everything else that comes with it.”

Asked if they would have children, Harry said: “Not currently, no! One step at a time, and hopefully we’ll start a family in the near future.”